Kumamoto, Japan, November 26, 2011 – FIVB President Jizhong Wei has been zig-zagging across Japan as part of a ‘goodwill’ tour to take in action from each and every site of the FIVB Volleyball World Cup Japan 2011 for both genders and build relationships with the local organizers. 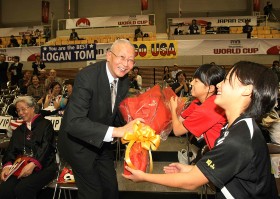 President Wei will visit both Fukuoka and Hamamatsu during the third round before finishing his whirlwind tour of Japan in Tokyo for the fourth round.

“The Japan Volleyball Association has helped arrange this trip for me,” President Wei said. “I have had the pleasure to meet all the local organizers and thank them for all the hard work that goes into organizing these two wonderful FIVB World Cup events.”

Along the way, President Wei has been impressed with the attendance at the sites, especially the Site B locations without local favorites Japan taking the court.  As part of the crowds filling up the arenas, school children are coming out in masses to experience watching the top 12 teams in the world first-hand.

INTERVIEW: Matijašević for WoV – “Thanks to...