Kumamoto, Japan, November 25, 2011 - Having dropped the first match of the 2011 FIVB Men’s World Cup against Russia, Italy has had won three straight coming into their contest with a tough USA squad. And indeed this proved an epic battle, which saw the highest scoring set in Men’s World Cup history go down in the first frame. When the dust settled, Italy were the victors in a hard fought 3-1 win (41-39, 25-22, 22-25, 25-21).

Leading the Italians in scoring was Michael Lasko with 25 points, supported by the captain Cristian Savani with 20. For USA, Clayton Stanley and Matt Anderson posted 22 and 20 respectively in a valiant effort, while William (Reid) Priddy followed with 19 points. Italy out-blocked USA 13-8. 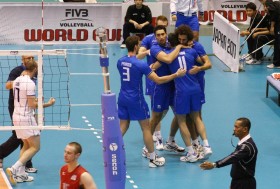 The USA jumped out to grab an early edge thanks to Priddy who posted a stubborn block on an attacking Lasko, followed by a hard ace to make it 10-7. Brian Thornton pumped up his side with a block on Ivan Zaytsev to keep the three-point lead at 16-13, but a trio of attacks from Lasko late brought Italy back to tie 23-23. From there it was an incredible see-saw battle, as Italy would take it on their 10 set point opportunity, fighting off seven USA set points to win 41-39. Italy’s Lasko and the USA’s Anderson both scored 11 in the marathon 45-minute frame.

The second set was just as close early, with Priddy and Stanley attacking well for the USA, and Savani countering for the Italians until they reached 10-10. Alessandro Fei put his side up three with an incredible block on Stanley to make it 16-13. Russell Holmes brought his team within one with a spike followed by a block on Simone Parodi to make it 21-20, but a Savani block would eventually clinch another close frame for Italy 25-22 to go up 2-0.

Luigi Mastrangelo fired up his side in the third with two consecutive blocks, but the USA weren’t fazed as Stanley scored twice to help his side ahead 9-6. Italy would come back to tie, but a Brian Thornton ace put the USA back ahead by two. The USA would ride Stanley the rest of the way (10 points in the set) to take the third 25-22 to push the match to a fourth set.

The USA carried that momentum into the fourth as an ace from Anderson and a hard spike from Priddy helped them go up 8-4. But Emanuele Birarelli played well off the bench, showing great hustle on a get near the sidelines that led to a tie score at 13-13. Eventually Lasko’s third ace followed by a pair of spikes would put his side up 21-18, and a Mastrangelo block on Stanley would help close 25-21, taking the match 3-1.

Fayazi: Playing with the best players is good for my energy