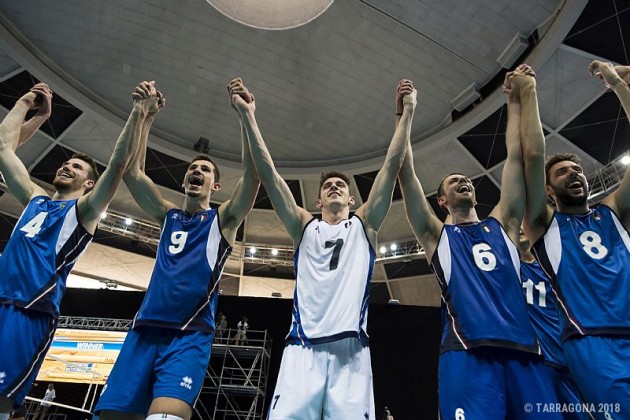 On their way to the gold medal, Italy lost only one set in five games overall in the tournament and that was exactly the one they dropped to Spain (3-0 vs. Greece and Portugal in Pool A, Croatia in the quarterfinal, and Egypt in the semifinal).

It was the third consecutive men’s volleyball gold medal for Italy in the Mediterranean Games (2009 Pescara, Italy and 2013 Mersin, Turkey). The „Azzurri“ once again confirmed their dominance in the medal table with seven gold medals, two silver medals, and one bronze.

„We are really happy, it was a very tight final. We knew that Spain would have given it all in front of the home crowd. I want to congratulate the boys. In addition to the technical qualities, they have shown character and heart on the court today. After the first two sets, we suffered a small fall but we quickly recovered,“ Italy head coach Gianluca Graziosi stated.

Sebastiano Milan top-scored for Italy with 27 points while Andrés Villena made 24 points for Spain.

VNL F6 W: Coaches of USA and Turkey proud of their teams

ECH U20 M: Czechs qualify for European Championship, Spain drop their berth to Poland in a thriller