The African Volleyball Confederation (CAVB) joined numerous federations both national and continental who postponed their competitions. 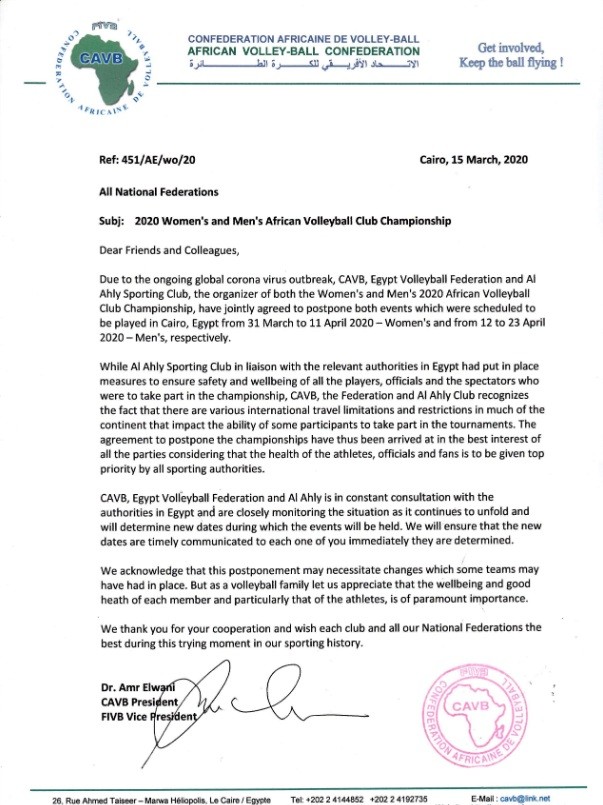 The governing body of volleyball in Africa issued a notice that they decided to postpone both men’s and women’s continental club championships that are supposed to be held in Cairo, Egypt, from March 31 to April 11 due to global coronavirus outbreak. As for Africa, the epidemic mostly struck countries in the north, including Egypt.

“While Al Ahly Sporting Club, in liaison with the relevant authorities in Egypt, had put in place measures to ensure safety and wellbeing of all the players, officials, and the spectators who were to take part in the championship, CAVB, the Federation, and Al Ahly Club recognizes the fact that there are various international travel limitations and restrictions in much of the continent that impact the ability of some participants to take part in the tournaments. The agreement to postpone the championships has thus been arrived in the best interest of all the parties considering that the health of the athletes, officials, and fans is to be given top priority by all sporting authorities,“ the CAVB stated.

CAVB W: Cameroon is the African champion for...

CAVB M: Cameroon and Tunisia will play for...

CAVB W: Results of the first day of...

CAVB M: No surprises in the quarterfinals –...