Argentina’s qualification to the FIVB Women’s Volleyball World Championship Italy 2014 after a 12 year absence, has created a great deal of local media interest since Sunday. 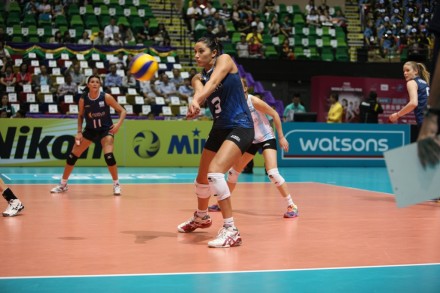 The team’s win made headline news in Diario Ole, Argentina’s most important sports daily newspaper as well as the La Voz del Interior and the country’s national newspaper, Clarín. The Clarín called the win an ‘unexpected party and surprise’ and congratulated the national team on fulfilling their ‘real goal of the season’.

And it is not just the media that are revelling in the excitement of Argentina’s win over the weekend. Members of the national team have found it hard to contain their joy, with Tatiana Rizzo saying, “I experienced the disappointment in 2009 when we were left outside the World Championship after losing to Peru. So to obtain this qualification means a lot to us. I feel very happy“.

“We qualified because we have been working very hard since March to with consciousness and dedication,” said coach Guillermo Orduna. “I am very proud to coach this team,” he added.

“We have worked since day one to obtain qualification to the World Championship and we fulfilled it, through our dedication and by focusing on what we all wished for,” said Yael Castiglione.

Team mate, Emilce Sosa said, “Since I was a child I dreamed about participating at a World Championship for Argentina and we just obtained it. I am living a dream”.

“We obtained it and we are part of the next World Championship,” said Lucia Fresco. “We played a great match and showed the difference. We had a very clear goal when we started training this season.“

Spiker Yamila Nizetich, who was a key player in Argentina’s win said, “I cannot believe it. We expected this since March when we started training. We wanted to reach this qualification and we arrived at this point with lots of hard work, effort and with a group of players that is getting stronger every day. We are very happy“.

ARG W: This proves why volleyball is...