World No.8 Argentina bounced back following their bitter defeat to Germany on Saturday with a straight-sets (28-26, 25-20, 25-21) win over Portugal in Pool D of the FIVB Volleyball World League in Frankfurt on Sunday. 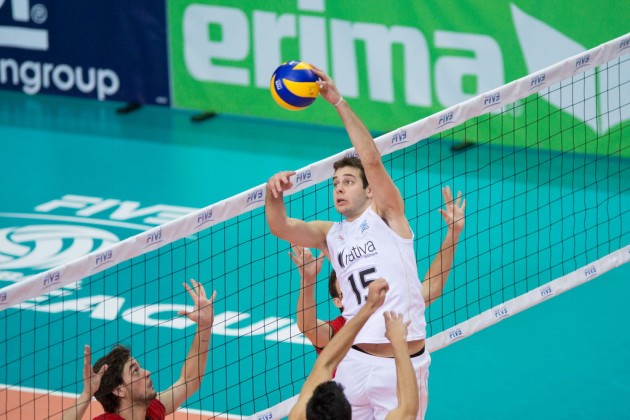 Argentina end the weekend with two victories and one defeat, while Portugal are yet to win a set. It was the 12th victory in 17 meetings for Argentina. Facundo Conte top scored for Argentina with 15 with Filipe Pinto matching that for Portugal.

Argentina coach Javier Weber trusted nearly the same starting seven as yesterday with the only change being blocker Pablo Crer for Gabriel Arroyo.

The South American team took command early on but Portugal piled on the presure through their serving (Alexandre Ferreira), with Argentina struggling with their serve. Argentina improved their serve and used their fourth set ball to win the opener.

The Portuguese team kept the defeat of the first set in mind and struggled coming into the second, making several faults in serving and attack. Argentina setter Luciano de Cecco distributed the ball well, helping his side extend the lead. Despite an improvement in Portuguese play, Argentina‘s advantage proved too much and they eventually took the set.

Portugal fought for every point in the third but their serving let them down. Weber made a number of substitutes but Portugal stayed in touch up to 17-17 but there was no real risk of Argentina losing the set as they eased to victory.