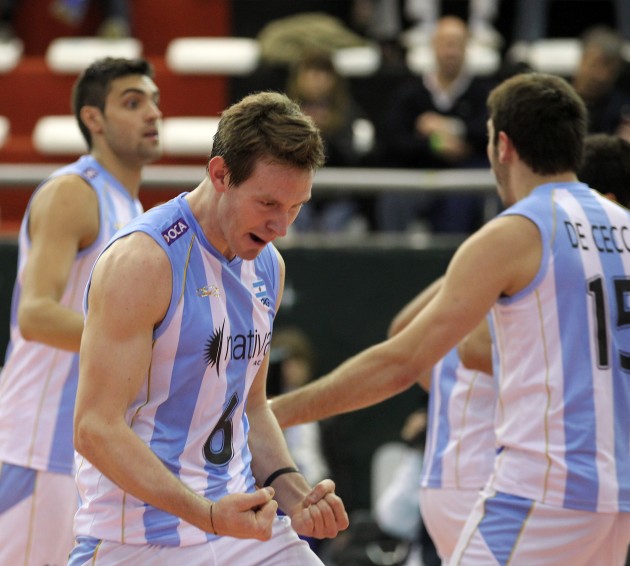 The top scorers were Facundo Conte with 22 points for the host team while Tsvetan Sokolov scored 19 for Bulgaria.

The match started out very tight and the two teams were even in the early stages. Argentina coach Javier Weber asked for his first timeout at 9-11 when Bulgaria started finding room behind the Argentine block. Bulgaria moved into a 14-9 lead with Luciano De Cecco scoring his first ace. When the gap closed to 13-12, Bulgaria coach Nayden Naydenov asked for his first timeout. Conte brought the scores level at 15-15 and it stayed close. Naydenov asked for his second timeout at 21-18, and Weber did likewise at 22-20. Cristian Poglagen brought up setpoint and Pereyra’s spike put Argentina 1-0 up.

Nothing changed at the beginning of the second set, but Bulgaria had the first two-point advantage at 5-3. Equal again at 6-6 with Sebastián Solé blocking, the fans appreciated the battle on court. Argentina took a two-point lead at 16-14. Bulgaria took a timeout 18-15 and Tsvetan Sokolov leveled at 19-19. Weber asked for a timeout and took a second one at 19-21. It was all-square at 21-21 but Bulgaria crept ahead to 22-24 before Argentina made it 24-24. Bulgaria dug deep once again and leveled the set scores at 1-1.

Bulgaria took an early 2-0 lead in the third set but were stopped by their own mistakes and a Poglagen ace. Valentin Bratoev responded with an ace of his own and Weber was forced to request a timeout at 4-7. After Argentina clawed three points back, Naydenov asked for a timeout. A Conte block leveled the scores at 14-14. As in the first two sets, the two teams fought point by point, but Argentina then opened up a 20-17 lead. Bulgaria did not give up fighting for each ball and Weber asked for a timeout at 23-21. His team responded to take the set 25-21.

The fourth set also started out close, but Argentina were 8-4 ahead at the first TTO and 11-5 soon after with the crowd cheering on their heroes. Bulgaria could not find its momentum and Argentina widen their lead to seven points at the second TTO. Bulgaria replaced players but could not find the right combination and Argentina cruised to victory.

On Saturday, Argentina will face Germany, while Bulgaria plays Portugal.