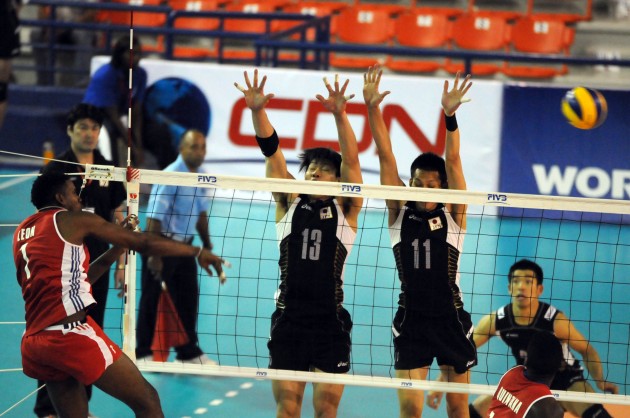 Cuba is now 3-1 with eight points, one less than Serbia who also have a 3-1 record. Japan fell to 0-4 with two points.

Cuba held a 14-5 advantage in blocks with Cepeda and Quintana registering seven and four, respectively. Japan led in the aces department, 6-4.

Cepeda and Quintana carried Cuba to an 8-2 lead in the first set. Cepeda continued with his consistent attack and was joined by Leon to give Cuba a 16-11 advantage while Shimizu was producing some big hits for the Asian side. Left-handers Cepeda and Shimizu exchanged huge spikes. Mesa hit one down the middle and Cepeda blocked for a five-point comfort zone. Mesa was not willing to stop and landed one more spike but then was blocked by Suzuki. Several errors by Cuba cut the gap to 22-19 forcing a time-out. At 23-20, Cepeda served an ace for set-point. Leon failed to close it in his first attempt but did not miss the next time for 25-21.

Cuba led 6-2 early in the second set, forcing a time-out.  Shimizu hit one spike followed by an ace and blocks by Yuta Yoneyama and Shigeru Kondoh. Cuba led 8-6 after a furious attack by Mesa down the middle. Japan tied at 8-8 with an attack by Fukuzawa combined with a block by Suzuki. Leon scored with a block after an opponent error and Quintana blocked for a three-point gap in favor of Cuba. After a Cuban unforced error, Shimizu and Leon exchanged massive spikes. Bell scored for Cuba and a 16-14 gap at the second TTO. Mesa and Diaz gave Cuba a four-point lead at 18-14. Takaaki Tomimatsu served an ace after a couple of Cuban failures and Shimizu equalized at 18-18. Mesa and Leon answered back. Lian Estrada landed an ace and Cepeda hit a crushing smash for setpoint at 24-20. Leon closed the set one more time with a thundering blow.

An ace from the net cord by Japan’s Kondoh broke a 7-7 tie in the third set. Tomimatsu blocked and continued with a massive attack for a three-point lead. Fukuzawa landed a bomb and Cuba called for a time-out with Japan in front 11-7. Two spikes in a row from Leon and one by Quintana cut the distance to 11-10 and it was now the Japanese coach calling for a time-out. Shimizu’s long shot evened the scores at 11-11. Shimizu and Yoshihiko Matsumoto’s hits around a Cuban error gave

Japan the lead 16-13 at the second technical timeout. Suzuki’s spike down the middle expanded the distance to 20-16. Fukuzawa and Leon exchanged a couple of spikes and Cepeda followed with a smash after an opponent error. Leon’s attack was out of bounds but Quintana came back. Leon’s serve crashed into the net for setpoint at 24-21. Cepeda kept Cuba alive but Shimizu succeeded with a stunning spike.

Japan took a 5-1 lead following two consecutive aces by Tomimatsu. Cuba was able to tie at 5-5 behind a spike and block by Quintana combined with two opponent errors. Matsumoto and Yenry Bell exchanged hits and Japanese setter Kondoh scored with a touch. Japan led 8-7 at the first TTO, but it was a close battle. At 14-all, Bell hit a sharp shot and Cuba led 16-14. Cepeda scored with a superb block for a three-point margin. Fukuzawa was not ready to quit and delivered a big shot. Two more blocks by Cepeda increased the distance to five points. Leon rocketed for set-point at 24-20. After a serving error, Leon sealed the triumph by delivering a cannon-shot and a 25-21 final score.

BEHIND THE SCENES: Photo shoot of Manon...