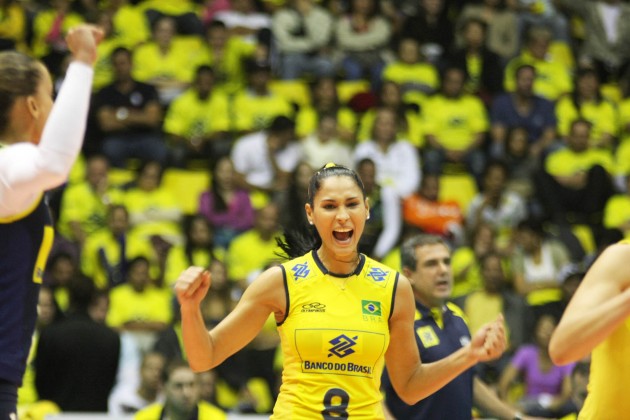 With their fourth straight win, the reigning Olympic champions now have nine points, while the Germans, who have a 2-2 record so far, remain on six points in the annual tournament.

Brazilian opposite and FIVB Hero Sheilla Castro led all scorers with 20 points, followed by teammate Thaisa Menezes with 15. German receiver Maren Brinker added 13 for her side.

Germany started the match without their captain, Margareta Kozuch, but the Europeans didn’t appear to miss their star early on, scoring the first four points of the match. Brazil improved, but Corina Ssuschke-Voigt blocked Thaisa to recover the advantage. Brazil took the lead for the first time at 14-13 when Brinker spiked out. The Europeans quickly reacted and moved to 18-14 with Furst stopping Fabiana. Remaining ahead until the end, the Germans sealed their win with a serve point by Beier.

The early part of the first set’s script was repeated in the second frame with Germany taking the first four points. Brazilian coach Jose Roberto Guimaraes asked for an early timeout and his side reacted, taking the lead at the first technical timeout with a serve point by Sheilla. The advantage increased to four points at the second technical timeout and to six at 19-13 when Thaisa blocked Brinker. In the end, with a good serving performance, the hosts took the set 25-14, helped by a mistake from Furst.

Brazil concentrated well to control the start of the third set, moving to 5-2 with Sheilla on the serve line. Playing with consistency, the hosts managed to hold on to their lead and Fabiana spiked to put them 16-12 ahead at the second technical timeout. German coach Giovanni Guidetti made some changes, but they were unable to stop Brazil.

Brazil took the lead in the fourth set and led 8-4 after a double contact by German setter Denise Hanke. Step by step, and helped by strong blocking, the Europeans reacted and controlled the match to lead 15-13 with Beier spiking. Brazil recovered and a Matthes spike at the net put them 23-22 ahead, from which they were able to seal the match.

Brazil will be back on court on Saturday to play Italy, while Germany will face defending champions the United States.