Argentina beat Great Britain 3-0 (25-18, 25-18, and 25-15) in the fifth and final round of men's volleyball preliminary matches at Earls Court on Monday to improve their record to 3 wins and 2 losses and finish third in the group. Facundo Conte top scored for Argentina with 15 points, including 2 aces, while Dami Bakare registered 14 for the home side of GB. 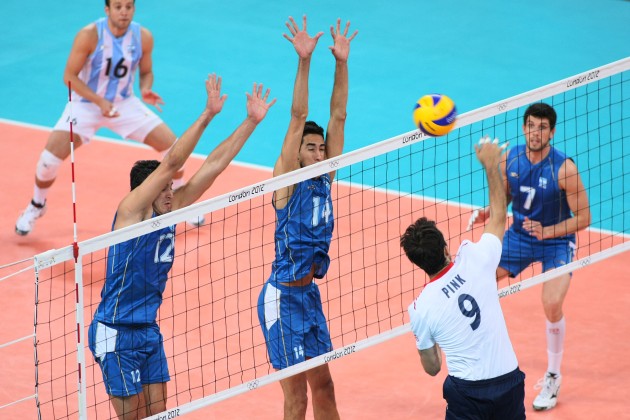 The result secured the South Americans a place in the knockout stages and eliminated the British, who lost all five of their matches at London 2012 without winning a set.

Facundo Conte and Federico Pereyra were dominant as Argentina got off to a quick start. Oluwadamilola Bakare hit some great spikes, but the rest of his team did not threaten. Argentina took the set 25-18.

Great Britain fought better in the second set, with Andrew Pink spiking well alongside Bakare, and as they pulled to within one point midway through, the home crowd was deafening. But Rodrigo Quiroga and Pablo Crer added to Argentina’s total, and the South Americans won 25-18.

In the third set Argentina moved ahead too. Conte and Bakare were the stars, but again Great Britain, who made double the amount of errors in the match, lacked precision. This proved decisive as Argentina won the set 25-15 and the match in straight sets.

Argentina finish third in pool A and will have their quarterfinal opponents determined by a draw at the end of Monday’s play.

ARG M: Bolívar one step away from...