ARG M: Argentina youth’s boys had a great match against Italy in Bolivar

At República de Venezuela Stadium in the city of Bolivar, the Argentine Youth’s Boys overcame the Italian team in the fourth match of the friendly series that started in the city of Buenos Aires beginning of this week (Tuesday morning) by 3-1 (25-21, 25-15, 18-25, 25-20) with German Johansen standing as best scorer with 20 points. This Sunday, also in Bolivar both teams will play the last match of this tour. 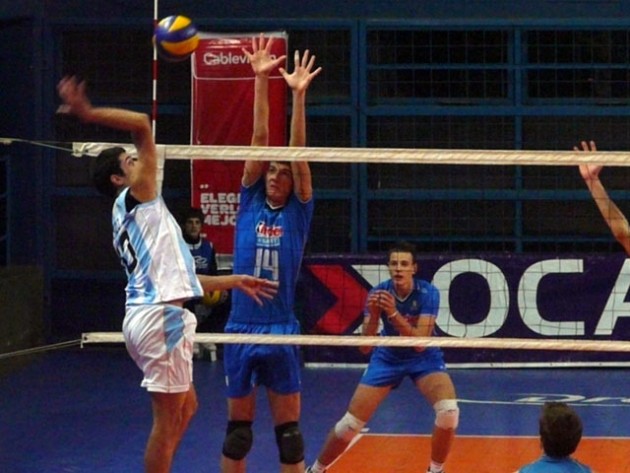 Argentina stands with a record of win-loss 2-1 and a match that ended in Azul 1-1 due to the terrible bad weather conditions. The plan was to play six matches but yesterday evening’s was suspended because it rained without stop and the organizers and both coaches decided to preserve the players from getting any injuries even though the stadium Sagrada Familia was full of children that anyhow got pictures and talked with their idols.

The first set started even and with Milan after a first TTO 8-7 the visiting team got a 3 point leadership. Argentina found its momentum and German Johansen started shinning even though Italy leveled the score 16-16. Sanchez serving hurt the European reception and Lima spike closed the first set with the partial victory for the local team.

Things change at the second set with Argentina getting a wide leadership with outstanding serving and spiking. The 8-4 for the local team became very son 20-11 also due to the Italian non-forced errors with Gallego adding two points to close it with a lead of 10 points.

On the third with Italy recovering concentration the set was very similar to the first one. Even though Argentina reached the first TTO 8-7 then it was Italy that pushed while the host team made mistakes and the second TTO saw a wide difference for the visiting team 11-16. An ace of Bortolato, good playing by Milan and the set won put the series 2-1.

Argentina did not change starting line-up for the fourth set and Lazo showed a great level to reach the first two point difference 8-6. Johansen and Gallego blocking added to Lazo’s spike found the home team leading 16-11 in the second TTO. Italy somehow gave up fighting and the light blue — white team won the set and the match.