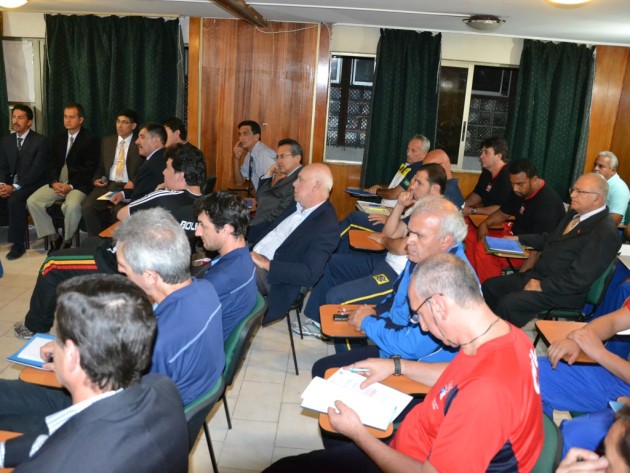 Nine teams divided in three pools give each team one day free and that is the way the boys coached by Julian Alvarez start, therefore facing Paraguay tomorrow at 14.30 Argentine time and on Friday, Colombia. Both teams will face each other today on the first date with Argentine coaching having the chance to study their performances.

The Argentine delegation arrived to Santiago last Monday, November 5th and on Tuesday they trained at the Olympic Training Centre, where the competition will take place this Wednesday onwards.

On Tuesday evening took place the general meeting for all nine delegations headed by Judith Rodríguez, Technical Delegate of the South American Volleyball Confederation and José Beltrán, President of the Chilean Volleyball Federation.

Rodríguez pointed out the fact that the championship takes place in Chile. “It is not easy to organize a South American Championship with nine teams. It is very expensive but there was an engagement and Chile is doing their utmost effort to give the competition the best possible way”. She also emphasized the fact that from this 9 teams tree will win their tickets for next world championship: “That makes it even more competitive, all want to participate and reach a World Championship”.

The organization decided to make one minute silence in the start of all matches of the opening day due to the death of the Brazilian officer, Antonio amchite, good friend of all South American Volleyball family, in charge of the Sport Commission of the CSV during several years and now first Vice-President of the Paulista Volleyball Federation, where he also was its president.

On the first date of the competition, at 14.30 will meet Colombia v Paraguay and at 17.00 Venezuela v Bolivia to close at 19.00 Peru and Uruguay.