After finishing second in the last edition of the Azerbaijan’s Super League, Igtisadchi BAKU got the right to participate in the 2014 CEV DenizBank Volleyball Champions League. This will be the very first appearance for this club in Europe’s elite club competition though they already have some experience in the European Cups. 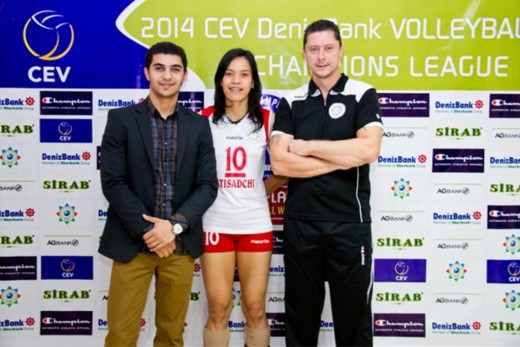 A press conference was recently held in Baku where head coach Bulent Karslioglu, team captain Wilavan Apinyapong, and team manager Zaur Seyidov shared their feelings with only a few days to go for their debut coming up next week in Serbia against Crvena Zvezda BEOGRAD.

“Since we are participating in the CEV Volleyball Champions League for the very first time, I have to admit that we feel very lucky and honored” said head coach Karslioglu. “Even though this is our first appearance in this competition, we are well prepared and our goal is to achieve good results.”

“Though I am also debuting in the CEV Volleyball Champions League, as team captain of Igtisadchi I would like to emphasize that we are one of the best and most professional Volleyball clubs in the world, so our intention is to play our best so as to win every single game though we know that very strong opponents will be standing on the other side of the net” added team captain, Thai receiver Wilavan Apinyapong, an Asian champion this year with her national team.

“I understand that this is the toughest and most demanding club competition in the world” stressed team manager Zaur Seyidov. “Our Pool is strong but we will be using our game style and team work to get the edge over the various teams that we are about to play”.

Apart from Crvena Zvezda, Igtisadchi will be also crossing their ways with those of Russia’s Dinamo MOSCOW and Italy’s champions RebecchiNMeccanica PIACENZA, another team that is debuting this year in the CEV DenizBank Volleyball Champions League.

To read more news from this country click on Azerbaijan W.

POL M: “They lost, that allows them to complain” – said Lukasz Perlowski