Not on purpose, of course. Two players collided on a receive. 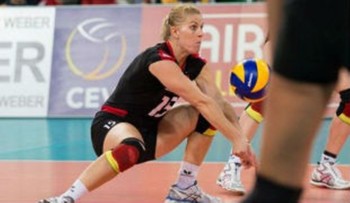 In the second leg of Cev Cup semifinals, Azeryol lost against Fenerbahce, but also lost Lisa Thomsen for some time.

German player was really unlucky. She wanted to receive the ball, but also did Margareta Kozuch. Two players collided, and Kozuch fell on Thompsen’s arm.  She had to leave the court with obvious pains.