After playing for 17 years for Azerbaijan’s women’s national team as well as in France’s and Turkey’s national leagues, Yelena Shabovta is currently using her extensive knowledge and experience to develop the next generation of Volleyball players in her native country. 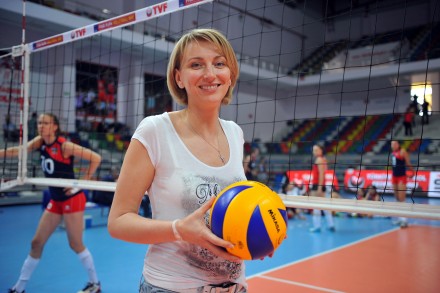 Shabovta accompanied Azerbaijan’s national team to Bursa where the rookies from Baku are playing hosts Turkey this weekend in the third round of the 2014 CEV Volleyball European League prelims.

“I do not miss Turkey because it does not feel like I have left the country,” she says. “I have so many memories from my time here. I know all players and teams. I won the national league here and also a CEV Cup, and played in the Final Four of the CEV Volleyball Champions League as well. But now I am back in Azerbaijan where Volleyball is not at the same level as here in Turkey. We haven’t played the World Grand Prix or at the World Championship for years. We have to work hard and follow a strategic plan.”

She has already set her sight on the 2020 Tokyo Olympics: “Before taking up this job, I prepared a plan spanning from 2014 through to 2020 and talked to our National Federation. They were positively impressed by my vision and as a result we started working together. We have the right facilities there, great sports halls and excellent hotels. However, we lack a sufficient number of young players to set up a youth programme. We do not have as many players as Turkey has at the moment. So far we did not have any restrictions to the number of foreign players a team could line up in the national league but starting with the 2014/2015 season the obligation will enter into force to have at least two players from Azerbaijan on the court and another one sitting on the bench. I am very optimistic.”

Check out other news from Azerbaijan.