Busto Arsizio has completed a very good job in Azerbaijan. They took 3-1 win and it is a huge step to the next round of the CEV Champions league. 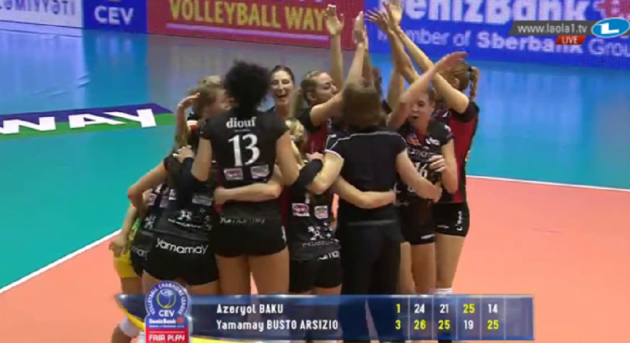 Home team gave resistance only in the two sets. It was not enough… The first set was the most uncertain. It was great battle between two sides and Italian took it 26-24.

After the second TTO in the second set (13-16), away side made 3-0 scoring run and it was the key for winning the second part of the game. The head coach of home team tried to motivate his players by using time-out but Azeryol managed only to decrease the lead.

The set started with referee’s mistake. After Busto’s attack, the ball touched the net and it went out, but referres said that it was block-out. Jovana Brakočević discussed with referee but couldn’t change anything.

Brakočević got angry and with two consecutive points, she tied the score (4-4). After the first TTO home team started controling the game. They set much better defense and they had 16-10 lead. Busto didn’t manage to make comeback and this part of the game went to home side 25-21.

The fourth set was the last one. Home side didn’t continue with a good defense and away team took that opportunity and won the match!

CL M: Kurek will not play against PGE Skra

AZE W: Rabita one point away from...