Rabita BAKU edged once more AsystelCarnaghi VILLA CORTESE of Italy in prelim Pool B of the 2013 CEV Volleyball Champions League, and again with the score of 3:1. Read the latest news from volleyball world on worldofvolley.com. 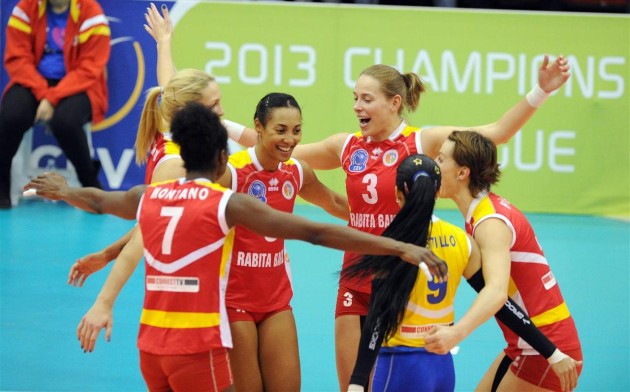 The Italians joined the game all having tattooed the number 10 on their shoulder as tribute to their libero Paola Cardullo who today underwent an ankle surgery. Rabita started aggressively showing the intention to go for a fifth consecutive win, with Madelaynne Montano and Foluke Akinradewo pacing the offense (25-20).

VILLA CORTESE tried to respond but Rabita was even more dominant in the second set that was easily controlled up to the final 25-13. However, anchored by young star Caterina Bosetti, VILLA CORTESE stormed back in set 4 going up by ten points (16:6) and sealing it at 25-15. That was nevertheless all for the home side as Rabita dominated the scene with their serves in set 4 thereby pocketing the fifth win that guarantees the Azeri team will finish the prelims on top of the group. On the other hand, VILLA CORTESE will fight next week with Atom Trefl SOPOT for the second spot available to make it to the Playoffs 12.

CL M: Via away win in Innsbruck Knack ROESELARE grabs second place in Pool A