The day August 11, 2012 will forever be marked in the minds of every Brazilian volleyball fan when Fernanda Rodrigues (Fe Garay) scored the decisive point in the 3-1 victory against USA in the gold medal match of the London 2012 Olympic Games. This and other volleyball news read on Worldofvolley.com. 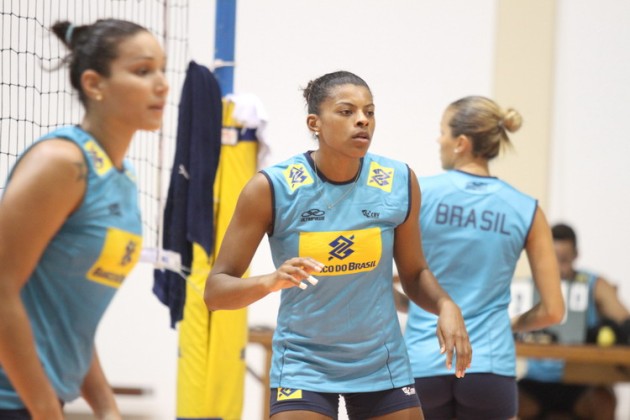 The victory steered Brazil to its back-to-back gold medal wins in volleyball at the quadrennial multi-sport event.

Nearly nine months later, Fe Garay is back in Saquarema in Rio de Janeiro to start another Olympic cycle. Fe Garay is on a good streak after being voted as Best Spiker in the Brazilian Superliga in the 2012-2013 season playing for club team for Sollys/Nestlé.

The player is one of the four Olympic champions alongside Danielle Lins, Tandara Caixeta, Adenizia Silva, joining a group of 15 players who are preparing for the Montreux Volley Masters in Switzerland from May 28 to June 2.

Brazil will also participating in a competition in Alassio, Italy from June 4 to 10, and the FIVB Volleyball World Grand Prix from August 2 to September 1.

Being aware of the responsibility of being one of the leaders of the new generation of Brazilian players, Fe Garay is committed and motivated in leading her team in the new Olympic cycle.

“Everything went very fast. Before, I was one of the youngest in the group, now I am one of the most experienced,” said Fe Garay. “I learned a lot from my teammates in London when we became the Olympic champions. Fabiana Oliveira (Fabi) always helped me in the baseline and Fabiana Claudino took care of the block coverage. Each one of us contributed in some way. Now that we have a new group, who is motivated and with new goals, we try to help each other and select the best ways possible to be successful.”

The striker believes that the group already has to look ahead for the next Olympic Games, which will be played in Rio de Janeiro, and the results of the start of their training has been very positive.

“Coach Zé Roberto always reminds us that the training for the Rio 2016 Olympic Games has started. We have important competitions before the Olympics, like the FIVB Women’s World Championships, which is the only title my team is missing,” said Fe Garay on the team’s intense focus on the competitions leading up to the Olympics. “Nevertheless, we have an opportunity to win a third Olympic gold medal. We believe that the thrill of playing in the Olympics in our country is indescribable.”

Although Brazil remain to be the most successful team in FIVB Volleyball World Grand Prix history with eight titles, they have to get past USA’s three-peat run. Brazil finished as runners-up to USA’s reign as World Grand Prix champions since 2010.