Isac Santos made his first start of the 2013 World League Finals as Brazil produced some impressive semifinal volleyball to sweep aside Bulgaria 3-1 and move into their 13th gold medal match. 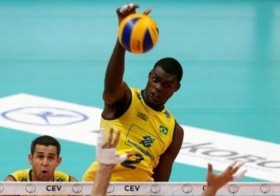 “I think that we were very focused on the game from the start. We put pressure on their serve and in the match we managed to do our strategy that we studied, and this was fundamental. At the end of the third set we made some mistakes, they took more risks and the game became a little more difficult,” said Brazilian middle blocker.

Isac received his first starting call from Brazil coach Bernardinho as Eder was having knee problems, but was happy to take up the challenge:

“When you get the opportunity to play, you give everything. I train to give my all and I did the most I could do.”

He also expects to play a part in the final as Brazil look for their 10th World League title:

“We know Russia very well. We will prepare in the best way possible, watch the film to see their things so we can neutralize them, play the game and leave it with an important victory.”

See profiles of Isac and Brazil.