Russia's top scorer with 21 points, Nikolay Pavlov, said fitness was the difference between the two sides after Russia beat Italy 3-1in the first semifinal of the FIVB Volleyball World League 2013 on Saturday. 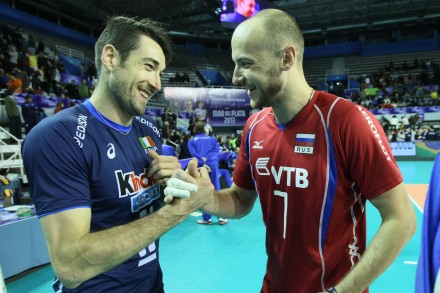 “The first set we won easily, they were playing their third match in a row, in the second one they played better and after the break we began to make some mistakes. Italy is a well prepared team and don’t forgive these kind of mistakes

“I don’t agree with Spiridonov’s red card because he didn’t do anything to make things worst in that moment, but it’s just a game and we are very happy to be finalists.” – said Nikolay Pavlov

“I think physical effort played an important part in this match. We were more concentrated and with more strength which help us to win”.

“We were better in all the aspects of the game, the team were motivated and could earn the victory because we played as a team”.

“The moment of the red card was a misunderstanding, something unexpected but it was a really emotive match and the players wanted to win so bad so this can happen.“

Read more about this competition on World LEague 2013.

To find more information about this Russian coach and player, click Andrey Voronkov and Nikolay Pavlov.