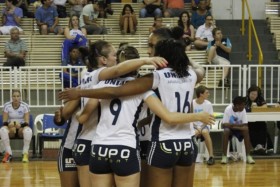 The coach of the winning team from Araraquara, Sandra Mara Leão, said that the team has fluctuated a bit during the match, after Fernanda Tomé had to leave the game. She broke her hand and will be forty days away from the courts.

“In the first set, we had more difficulties because I had to change some positions as the result of Fernanda being out, but despite the ups and downs, we managed to win and achieve our goal,” she added.

With this victory, Uniara will stay undefeated in the competition. The next game will be against Uni Sant’Anna, on the August 25th, at 2:00 PM, at the “Olympic Center” in São Paulo.