The winner of the 2013 National League is ACDB/Rio Claro (SP). 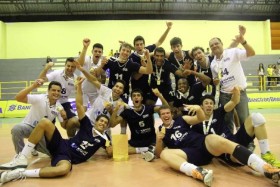 In a game in which details were decisive, ACDB/Rio Claro was more efficient on offense and benefited by excessive errors from the team from Bahia.

With the attacks from spiker Evinho, the Paulistas had advantage and won the National League title for the second consecutive time.

The team from Manaus started better, but blocking from the team from Santa Catarina had great importance in their reaction in the third set.

This was the first year that team from Santa Catarina participated in the tournament.