Russia’s Lokomotiv Novosibirsk overcame Sada Cruzeiro and their legion of fans at Divino Braga Gymnasium, who the captain Alexander Butko called like “a seventh player” for the home team. 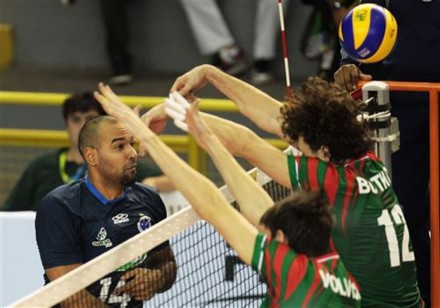 Alexander Butko, captain of Lokomotiv: We played against a good team and we knew also it was going to be difficult. The Brazilian fans are like a seventh player for their team. I like that we won because half of the starting six are new players and is good to win these types of matches to know that we are a real good team. This is not finished yet and we have more difficult matches ahead.

William Arjona, captain of Sada Cruzeiro: It was a good match with some errors for moments. Lokomotiv played well and their serves were the difference. Now we have to think about the semifinals because we are qualified. About the last two calls by the referees they were correct. First I attacked over the net with the volley from the libero and the referee was right over the play. Then, the attack by Leal was out.

Andrey Voronkov, coach of Lokomotiv: We won against a good team and it was important to win. But at the same time we made a lot of mistakes with our serves and blocks. For some moments, Sada Cruzeiro capitalized on our mistakes. I think we won because we played together as a team.

Marcelo Mendez, coach of Sada Cruzeiro: It was a good game with both teams playing at the same level. The stats are very similar. The Russian team served well and that was the difference. We didn’t make a lot of mistakes. Now we have to think about our next match in the semifinals probably against UPCN or Trentino.