Olympic champions Brazil downed the United States 26-,24, 26-24, 25-20 in their round-robin match at the FIVB Women's Grand Champions Cup on Tuesday. 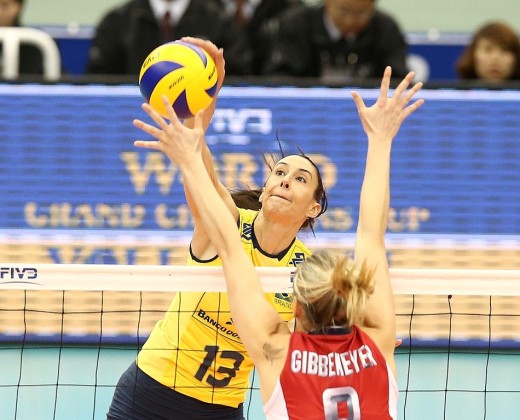 In a rematch of the gold medal game at the London Olympics, Brazil held off a strong challenge from the Americans. It was the third victory of the year for the South Americans in head-to-head matches with the Americans.

The first two sets were close, and the USA appeared to have the second one in hand, before letting it slip away.

Brazil exhibited strong defense at the net and showed poise under pressure on the key points throughout the contest.

Fernanda Rodrigues Garay and Natalia Pereira paced Brazil in the victory with 13 points each. Veteran Sheilla Castro, selected MVP of the match, chipped in with 8 points. Kelly Murphy scored a match-high 14 points in the loss.

Brazil scored with 10 blocks -three apiece by Adenizia Silva and Fabiola Souza to 5 by the defeated side. The winners held a 2-0 margin in aces.

WGCHC W: Jose Guimaraes – “We had our ups and downs”