Brazil took on a spirited Iran squad on Tuesday, the first day of 2013 FIVB Volleyball Men’s World Grand Champions Cup in Kyoto. With enthusiastic pockets of Iranian and Brazilian fans in attendance at Kyoto Prefectural Gymnasium, Brazil handily took this match 3–1 (25–16, 25–17, 25–27, 25–23), but not without difficulty from a confident Iran team. 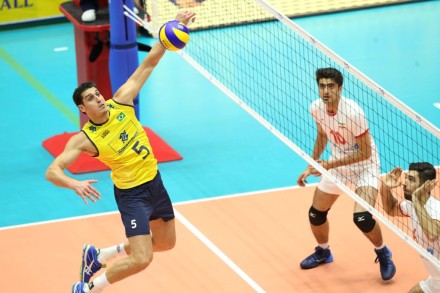 Brazil’s offensive attack was a true team effort, with four players scoring in double digits, led by Wallace De Souza who notched 19. He was supported by a great effort by Sidnei Dos Santos Jr. (aka Sidão) who scored 15, including 5 blocks and a pair of aces. For Iran, it was Amir Ghafour leading the way with 15 points.