Brazil started their campaign in the 2013 FIVB Volleyball Men’s World Grand Champions Cup with a tough 3–1 win over Iran. Brazil’s captain Bruno Mossa Rezende, who was awarded as player of the match, hopes that his team can play more calmly at critical junctures and finish better than they did today. 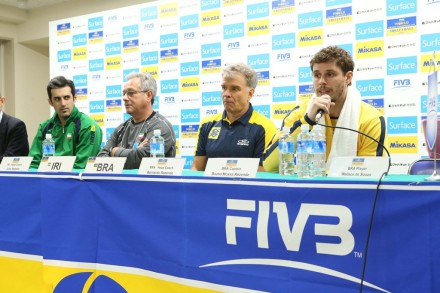 Brazil coach Bernardo Rezende: Iran is one of the most, if not the most improved team in the last few years. Now they are among the best, and as coach Velasco said, they are not a surprise anymore. They played in the World Cup, in the World League, and they have good chances to win wherever they go. They are well trained, they played well in the Asian Championship. We lacked match rhythm since we played very little this year. We put lot of pressure on them, had confidence at the beginning.This was a very good test in this very good tournament. It is a good win for us, the first step in a very good tournament.

On Bruno Mossa Rezende and combo with attackers: I think we are more effective in the pipe right now, but the middle attackers were not used so well. They are usually good, used to playing with one another. […] But I think that it’s starting to work. Wallace is coming back from an injury and is starting to do well.

On USA tomorrow: They are a completely different team. We have been playing each other in finals since the 80s. They have a system that always works well, and a new coach who is a very smart guy, very effective. They have good players, and when they play together they are always tough. They have a powerful serve, with Anderson, Holt… They have a young setter who I have to study more. We have to make few mistakes because they make you play, and you have to play well to beat them.

Brazil captain Bruno Mossa Rezende: I have to congratulate the Iran team. I think they have improved a lot in last three years. They are a good team, they play very fast. We played well in the first two sets, accurate in serving and sideout. In the third set they played better, and in the last part of third set there were some nervous mistakes on our part… I don’t know why. We have to try to be more calm so we can finish. In the fourth I think the pressure was reversed, and we didn’t play so well, but it’s very good to win three points against a team that will win some matches in this tournament. Now we have to think about the USA tomorrow.

On his team’s strength: I think in the past 12 years our team has won much, and the attitude is to fight as if its the finals. We want to work hard, we will try to work and improve. We want to follow the example of the previous players who were with us.

Asked by Japanese reporter about a Japanese restaurant he has opened: Yes, I have a restaurant, we love Japanese food. So I think it’s a good investment, trying to make some money away from volleyball. (laughs)

Wallace De Souza: It was like a test for us, we knew it would be difficult. There were lots of mistakes, but many good points too. We’ll try to do our best tomorrow.

WGCHC M: “Our payers learned a lot in this match“- said Velasco