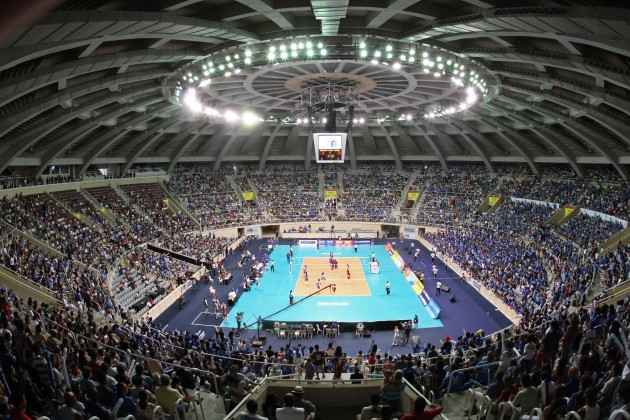 The match, which was also broadcast live on TV across the country, was highlighted by the presence of seven Olympic champions, with Mari, Sheilla, Valeskinha, Fabi and coach Bernardo “Bernardinho” Rezende stepping out for Unilever and Walewska and Paula Pequeno playing for Volei Futuro.

Despite the massive home support for Unilever, who needed to win to advance to the final, they went down in a thrilling five set match (22-25, 25-22, 25-20, 22-25, 7-15) as Volei Futuro tied the three-match-series. The final match will be played this Friday, at Maracanazinho, with the winner taking on Sollys/Nestlé in the final, scheduled for April 14.

The win means the club earned promotion to the 2012/13 Men’s Superliga.

Apav/Canoas counted on the experience of libero Jefferson Orth and opposite Anderson “Xanxa” Menezes.

However the biggest praise was left for Barcelona 1992 Olympic champion Paulo Jurovski, nicknamed “Paulao”, who sealed the title in his first year as coach.

“I am really thrilled,” Paulao said. “I am passionate for volleyball and I should not have stayed off the court for such a long time. At home, everyone lives, eats and breaths volleyball. This team was prepared in a very short time, but everyone had a huge commitment with the project.”

Funvic/Midia Fone coach Joao Marcondes said the absence of wing-spiker Luis, who was injured in the semifinal match, was a crucial in his team’s loss.

“We have a young team, who missed one of our most important players,” he said. “Luis is a good influence and would have been important in many situations of the match. We had no patience in some key moments, but Apav/Canoas played really well and deserved to win.”