In a tough match of penultimate round, Rexona/Ades Rio de Janeiro maintained its unbeaten record in Brazilian Super League to 23-0! 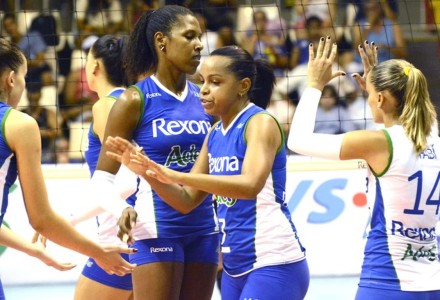 Rexona was led by Gabi, who finished the duel with 22 points. Thaisa was the best scorer of the match and in Osasco as well, with 24.

The duel also had the honoring part. Before the game, Rexona’s setter Fofão, celebrated her 45th birthday. Close to retirement, the athlete received a bouquet of flowers from the opposing setter Dani Lins.

Rexona assured first place in the classification stage and has 66 points while Osasco is third with 41 and if it wants to keep that spot, it needs to win in the last round.

It’s interesting that two best teams in Brazil at the moment, Rexona and SESI-SP São Paulo will play against each other in the last round, on Friday.

Jaqueline continues with excellent performances in Camponesa/Minas Tênis Clube Belo Horizonte. She was notable again in her team’s win versus Brasília Vôlei.

With this result, Minas remains in fourth place with 49 points, but with the chance to skip Osasco in the last round.

On the other hand, Brasília is seventh and has the opportunity in Round 24 to keep its ranking.

The last round will also give chances to fifth placed Dentil/Praia Clube Uberlândia and eighth placed São Cristóvão Saúde/São Caetano to move forward before the playoffs.