OI 2016: “Brazil is on the right track” said legendary Giba 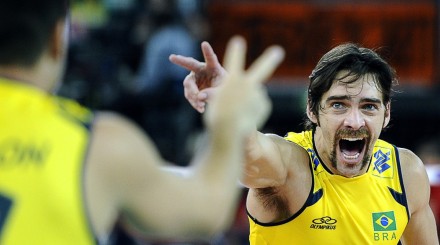 The 38-year-old helped Brazil to their most recent Olympic gold, when they returned victorious from Athens 2004, a tournament in which he was named best player. He also helped Brazil to silver at Beijing 2008 and FIVB Volleyball World Championship gold in 2002, 2006 and 2010.

Brazil’s defeat in the London 2012 gold medal match came in remarkable circumstances as Russia fought back from losing the opening two sets to prevail 3-2. Brazil then lost their World Championship crown in 2014 when they lost 3-1 to host nation Poland having won the opening set. They also missed out on gold in the 2014 FIVB World League by losing to the USA in the gold medal match.

“Brazil reached the finals of all their tournament that they have played in since 2013, the first year of the Olympic cycle. Brazil is on the right track.”

As a native of Rio, Giba has been a first-hand witness to the changes that have taken over the city.

Preparations of the venues are on course and the Maracanazinho Arena that will host volleyball is on course to be filled on a daily basis after it was revealed that volleyball was the most popular sport after the most recent round of ticket applications.

He said, “I live there and have been keeping up with the works. I’m very happy because everything is working as planned.”