Sada Cruzeiro has defeated Sesi in the big final of the Brazilian Championship and won the 3rd title in club's history! The game was marked by an epic comeback of the champions in the third set.

Sesi started the big final in strong rhythm. The team from Sao Paulo went on the first TTO with 3 points ahead – 8:5, but Sada Cruzeiro tied the score at 8:8 for the eruption of joy from their fans. However, players of Sesi silenced them pretty quickly. Ricardo Lucarelli and Murilo Endres were fantastic in offense, while Riad made several great blocks and the away team escaped to 16:11!

Sao Paulo side was successfully keeping distance, but the real danger came in the late phase of the set. Sesi was up ahead by 22:19, Sada Cruzeiro had a counter attack. Murilo Endres blocked Wallace De Souza! it was the key moment, as Sesi escaped to 23:19, and a few moments later closed the set with a great first tempo of Lucas Saatkamp – 25:21, 1-0 for Sesi!

Sada Cruzeiro had a better opening of the second set. Thanks to some amazing serves of Yoandy Leal (one of them went 113 km/h!) the home side went on 8:6. Several moments later the score was 12:8 for Sada! Wallace De Souza was dominating in those moments (though one of his aces was clearly out, but referees called it in)… But, it was only the beginning of a true drama in this set.

Sesi scored next four points – 12:12! Coach of Sada had to change something and he replaced Filipe Augusto Faccion, who got blocked several times, with Frederic Winters, and the it was the Canadian player who stopped the rival’s run – 13:12… A few moments later Leal  scored for 15:13. A two-point margin remained until Ricardo Lucarelli scored for 16:16, however, then the same player got blocked 1-on-1 by Wallace and Sada once again escaped on +2, 18:16. 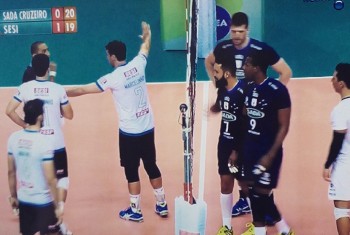 Probably the key moment of the set happened at 21:19. Leal scored from a counter attack, but he perhaps made a mistake by landing on the rival’s side of the court… Serginho argued loudly not only with the referee, but with the whole Sada team. The outcome – yellow card for Serginho and a point for Sada – 22:19. That was it. Blue and whites scored the next three points and finished the set with 25:19, 1-1 in sets.

The third set was marked by two big comebacks, and one of them had an epic ending. Sada Cruzeiro quickly gained a convincing lead – 7:3, but then the margin started to melt. Murilo made ace for 9:7, Saatkamp made one block for 13:12, and then another for 13:13, while in the next point players of Sada made a mistake and Sesi took over the lead 14:13! That was the first major comeback, but just wait to hear the other one.

After point-for-point game, Riad made a big block and pushed Sesi to +2, 18:16. Then Saatkamp made an ace – 19:16, while Theo Lopes scored a few moments after for 22:18! It seemed that everything was over… But, it was not! Sesi had three set points at 24:21… Team from Sao Paulo failed to use any of them! When Theo Lopes got blocked for 24:24, the fans in the Hall started celebrating like it was a championship point.

And just imagine the atmosphere when Saatkamp touched the ball on the wrong side of the net and gave a set ball to Sada Cruzeiro – 25:24! Murilo managed to save that one, but not the following one. At the score 26:25, Ricardo Lucarelli sent the ball out of bounds – 27:25, 2-1 in sets for Sada Cruzeiro!

The blue and whites felt that it was time for the final push. Despite they were down by 6:4, players of Sada Cruzeiro then scored next 5 points and made a big turnaround – from 4:6 to 9:6! They were simply on fire, and the best proof was the point for 11:8 – Wallace De Souza scored it with his head! But, it was Eder who was the man of the fourth set. The middle blocker of Sada blocked Lucarelli for 14:10, then scored for 16:13 and finally made ace for 17:13… Everything was over. Frederic Winters scored the last point in this season with great spike – 25:19.