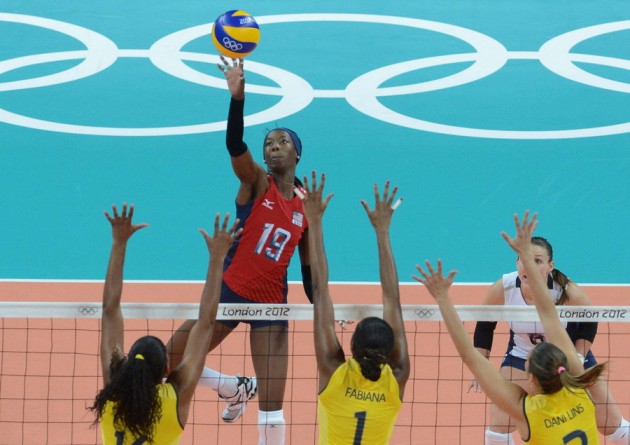 It was the second victory in a row for the Americans –both in four sets- valid for six points while Brazil fell to 1-1 with just two points.

Hooker concluded the match with 23 points while Larson totaled 18 and Logan Tom added 11. Brazil’s Sheila Castro collected 14 points and was followed by Thaisa Menezes with 11 and Fabiana Claudino and Paula Pequeno each with 10 points.

There was a good atmosphere as world No.1 USA looked to avenge their Beijing 2008 defeat by Brazil, now ranked No.2 in the world. The points progressed evenly, with USA scoring through Logan Tom and Destinee Hooker. Brazil fired back with spikes from Paula Pequeno and Thaisa Menezes, bringing it to 11-11. Both teams defended well, but USA opened up a gap mainly thanks to some impressive spiking from Jordan Larson and took the first set 25-18.

In front of watching basketball star Kobe Bryant, Larson continued her good form in the second set and Hooker also started to rack up the points for USA. Brazil stayed in touch as errors crept into USA‘s play, but the latter soon upped their game again and Hooker and Larson pulled USA clear. They convincingly won the second set 25-17 as Larson finished the set with 12 points to her name.

Brazil came back into the match early in the third set, establishing a gap. Sheilla Castro was the key player, but USA found form again and drew level before going ahead 16-15 as they looked to win the match in straight sets. However, Brazil were far from finished and rallied to go 22-21 in front. Their confidence grew and eventually they took the second set 25-22.

The start of the fourth set was close, but following the first technical timeout USA established a 10-7 lead as Hooker added to her impressive points haul – dominating at the net. USA continued to hold their lead and stretched it further as they led 16-12; a scoreline that included a deft drop shot from Captain Lindsey BERG. Brazil didn’t give up as Pequeno and Fabiana both spiked. However, individual errors from Brazil cost them as they handed USA match point from their own serve. USA won the final set 25-21 and Hooker finished as the match’s top scorer with 23 points.

USA will play China, the second strongest team in the pool, on Wednesday as they look to make it three wins from three matches. Brazil take on Korea who lost to 3-1 to USA on the opening day of matches.

OG W: Korean Kim wants to be a complete player