Team USA re-asserted its credentials for Olympic gold this afternoon at Earls Court by displaying a terrific performance to edge Brazil 3-1 in what was the most anticipated match of the day. Logan Tom, 31, is participating in her fourth Olympics in London and is definitely chasing her Olympic dream after having to be content with silver four years ago in Beijing. “I think the strength of this group is that we are very close, so this relationship really makes the difference out there on the court. It was not like that at the beginning, but we have gotten very close and even if an individual has ups and downs, the others are there to help and compensate for it. This is a really nice group and I am proud of being part of it”. 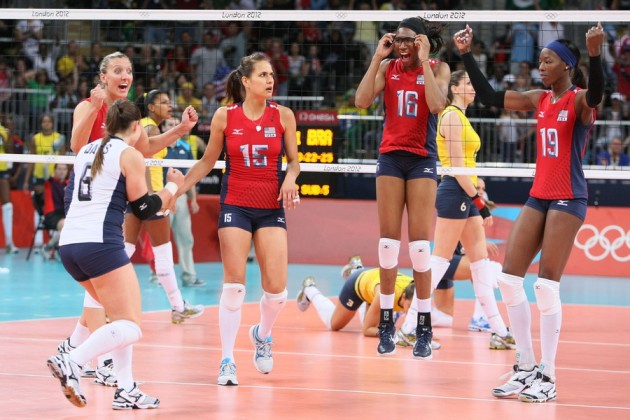 Tom, who was born in Napa, California, spent the last season in Turkey where she helped Fenerbahce claim Europe’s most elitist competition, the CEV Volleyball Champions League, thereby completing a chase that had been lasting for the last three seasons. There she played together with Korean star Kim Yeon-Koung, who ammassed a terrific haul of 34 points to anchor her side to a 3-1 win over Serbia in the morning session at Earls Court. Invited by the FIVB to attend a special media event in connection with the “Heroes” campaign, Kim mentioned there that Tom is the player she looks at when it comes to an inspirational figure. Informed about the statement given by the Korean scoring machine, Tom laughs and says: “Oh, I am glad that she said that; she is an amazing person and an outstanding player. She is still very young and will be a major star for the years to come”.

On Saturday Team USA opened its Olympic campaign by edging Korea 3-1 and Tom agrees it looked a little strange to see her Korean friend standing on the other side of the net after spending the last season together.

Even though she scored “only” 12 points on Monday afternoon against Brazil, with Team USA paced by Destinee Hooker and Jordan Larson with 23 and 18 respectively, Tom looked like one of the real leaders of the group, making sure they were all sticking together to go for the win. She agrees with team captain Lindsey Berg who on Saturday had stated she does not realize the rookies of the group are making their Olympic debut here in London. “Yes, that’s true. They all play with great confidence, they have got that fire and fighting spirit that certainly helps go straight for the maximum goal. I know some people think this match with Brazil was a kind of pre-final, but we just want to take it match by match. We were assigned to a very strong Pool and I can only say I hope on that day where Olympic gold will be at stake, we’ll be part of the show. On the other hand, the opponent may be Brazil or some other teams, as there are many squads that can have a shot at the medals here in London”.

A very talented athlete – she competed also in basketball and track & field while attending Highland High School in Salt Lake City – Logan may crown an already memorable season that includes also the FIVB World Grand Prix title with the only medal that can contribute immortal glory. Olympic gold will be at stake on August 11 and Team USA has a mission to accomplish…