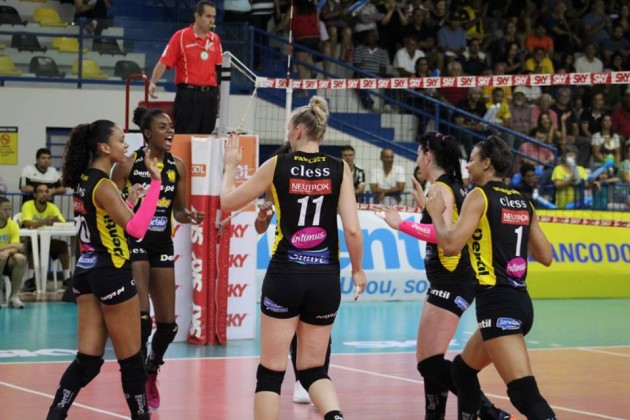 Once again, Praia swept one of the rivals in the national championship for a 7-0 record (21-0 set ratio!). This time it was Camponesa/Minas in the derby of the Minas Gerais state in Round 7, partially 25-21, 25-22, 25-23. Amanda Campos was the best scorer for the leaders of the Superliga with 17 points while Priscila Daroit ‘Pri Daroit’ made 13 points for Minas, whose four-game winning streak came to an end.

Someone else’s four-game run was over as well. Hinode Barueri, led by the Brazilian Women’s National Team head coach José Roberto Guimarães ‘Zé Roberto’ succumbed to Fluminense F.C. by a 3-0, on the road.

The defending champions Sesc RJ had an easy job against BRB/Brasília Vôlei, 3-0, thanks to a huge blocking display of the whole team (15 kill blocks) in which Mayhara Silva stood out with 5 kill blocks. As for the scorer’s list, Drussyla Costa notched 14 points for the winning side, who are still unbeaten, while there were no players with double digits in Brasília.

A traveling Vôlei Nestlé/Osasco achieved a hard-fought win over Vôlei Bauru despite having a 2-0 lead in sets. Tandara Caixeta was again a lifesaver for the title contenders as she poured down 30 points. The Cuban Yoana Palacio made 21 points for Bauru. Andressa Picussa contributed with 6 kill blocks.

This is why crowd gathers to watch volleyball! Christenson challenges top setters with this uncommon pass (VIDEO)