CL M: Zaksa and Perugia conquer Russia and come one step away from semifinals

Zaksa Kędzierzyn-Koźle and Sir Sicoma Monini Perugia return home from the first matches of the 2020 CEV Men’s Volleyball Champions League quarterfinals, practically, with a ticket for the semis in their pockets. 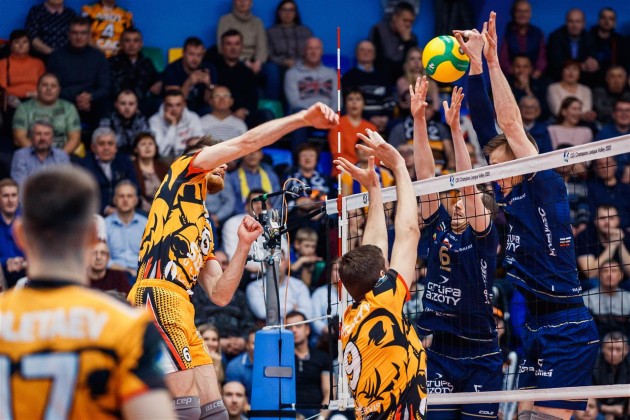 After a fierce battle of the two national champions, that lasted for nearly two and a half hours, Poland’s Zaksa Kędzierzyn-Koźle defeated Russia’s Kuzbass Kemerovo in the first leg of the 2020 Champions League quarterfinals. Recall that Kuzbass finished Pool B as second-placed, while the team coached by Serbian Nikola Grbić went through a pool stage without losing a single set. Despite the difficult situation, as they trailed twice in sets, Zaksa managed to turn the match around and come one step away from the Champions League semifinals: 3-2 (22-25, 26-24, 17-25, 28-26, 16-14). Kamil Semeniuk top-scored for Zaksa with 19 points. Viktor Poletaev, who recently recovered from an injury that separated him from the court for a long time, tallied 24 points for Kuzbass.

Italian vice-champions Sir Sicoma Monini Perugia also made an important step towards the semifinals of the competition. Vital Heynen’s team beat Russia’s Fakel Novy Urengoy in four sets. Serbian Aleksandar Atanasijević led the “Block Devils“ with 17 points but the role of two more players in the win was also important. Atanasijević’s compatriot Marko Podraščanin made an 83% attack (10/12), while Roberto Russo made a 77% attack (10/13). Hungarian Krisztián Pádár scored 21 points, including 5 aces, for Fakel.