Top Posts
CAVB W: Nigeria head coach threatened with death...
FIVB: All participants of the 2022 Women’s World...
JPN M: Nakagaichi resigns as head coach
CEV CL W: Olympiacos started the Champions League...
SRB M: Atanasijević – “We have to look...
POL M: Heynen to change course of his...
FIVB: All participants of the Men’s World Championship...
CRO: Leo Andric – “I am satisfied with...
DOM W: Rivera retires from national team after...
NED M: Plak explains why he was excluded...
Home » F4 in Treviso: Barbolini – “We prefer to play on Sunday at 18:00 not at 15:00, but…”
CEV

After the first semi-final match between Vakifbank and Eczacibasi, the members of defeated team were honest. 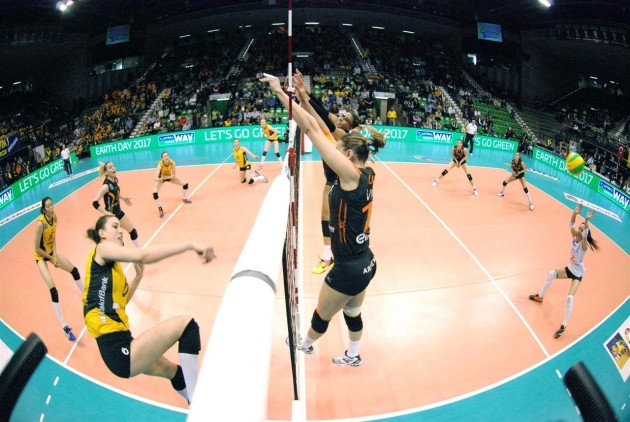 “We have to congratulate VakifBank. They played very good match. In the difficult moments they reacted in the good way. In the second set we were waiting for something but nothing happened and we needed to close the set. We didn’t because of some our mistakes but also because they deserved. They played better than us in crucial moments” said coach of “Tigers” Massimo Barbolini and added for tomorrow’s match:

“Now, we have to think about tomorrow’s match, to give our honor to this Final Four because it’s important for us to be here. Normally, we prefer to play on Sunday at 18 not 15 but there is one match and I‘m sure that girls want to react after this losing match.”

On the other side Rachael Adams said:

“I think both teams did a good job today but match was with ups and downs. Vakifbank did a great scouting of our team, we played each other so many times and they did well. We are excited to be here so we will give our best in the match for the third place no matter what”

About advantage of seven points in the second set she said: “Of course when you start a set so strong and you are leading by that much it definitely doesn’t feel good to lose this set. It’s a little bit discouraging but we did our best to come back in the third set, but that wasn’t enough.“

F4 in Treviso: Guidetti about second set – “I thought WTF…It’s not appropriate to repeat?”

ITA M: Trentino run over Perugia in Game 5 to advance to the finals!