We know the names of the countries that will host European Championship in 2019!

Slovenia, France, Belgium and the Netherlands are going to team up and organize the best tournament of the European continent.

These are the potential host cities so far, but there are some more to be confirmed: Antwerp and Brussels (Belgium), Ljubljana (Slovenia), Aix, Montpellier, Nantes, Paris, Toulouse, Angers (France), Amsterdam, Apeldoorn, Rotterdam (the Netherlands).

“It’s been a long time since we had EuroVolley in Belgium, I think we have very ambitious team and we have proven it at this EuroVolley tournament and we want to prove it at the next tournament as well. I really hope numerous fans will support us in 2019,” says Sam Deroo, a player of Belgium.

“I’m very happy because volleyball in Slovenia is growing in a previous few years and I hope we will be more popular after this European Championship,” says Tine Urnaut, a player of Slovenia.

“I think it’s a great opportunity for our Federation to organize this tournament together with these countries. I’m very happy about it,” says Dutch captain Jasper Diefenbach.

“We are very happy to organize such a big tournament. We have been waiting for this event for a long time,” says Benjamin Toniutti, a setter of France. 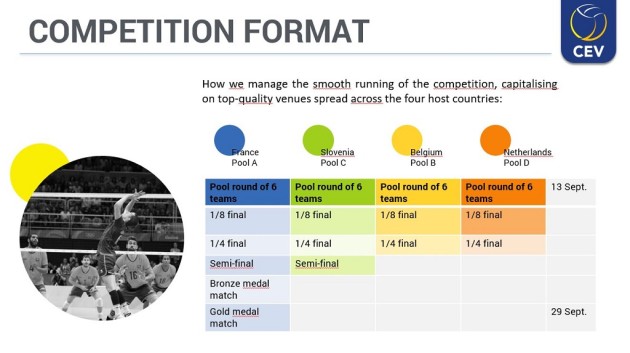 CL M: Karlovarsko make it to 2nd Round...

CL W: Ub and Prometey one step away...

Four countries?!
So, so stupid…