Both VfB Friedrichshafen and Zenit Kazan extended their winning streaks to five games in the 2018 CEV Men’s Volleyball Champions League after they punched Playoffs 12 tickets earlier. 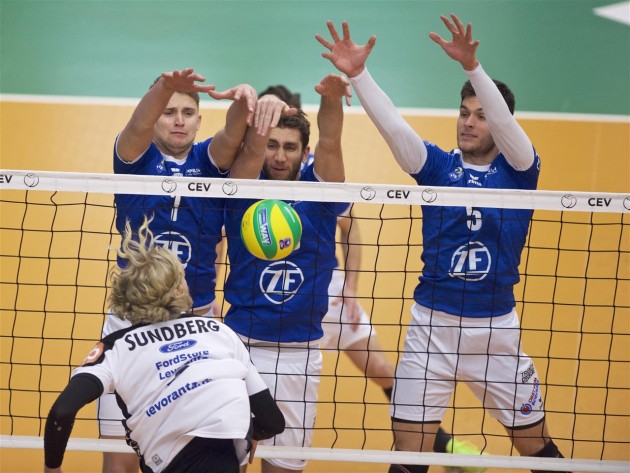 The German runners-up VfB Friedrichshafen scored an express win over Ford Store Levoranta Sastamala from Finland to remain undefeated in Pool B and extend their winning streak to five games after they secured their Playoffs 12 spot earlier. The Pole Bartłomiej Bołądź topped the “Häfler” with 13 points while Philipp Collin made 88% attack (7/8). There were no double-digit players in Sastamala, who finished the match with a poor attack (28%) and without serving a single ace.

German titleholders Berlin Recycling Volleys missed their first “match-ball” for qualifying into the Playoffs 12 as they succumbed to the defending champions Zenit Kazan from Russia at the half-full Max Schmeling gymnasium (5,228 spectators) and with their head coach Stelian Moculescu making his debut. As soon as they remained without Wilfredo León, who left the court after the second set, Zenit began to struggle against highly motivated rivals who, on the other hand, could extract only one set from the close Pool D game. The Australian Paul Carroll topped BR Volleys with 14 points. The American Matthew Anderson notched 19 points for Zenit. BR Volleys will seek their Playoffs 12 promotion in the last round against Jastrzębski Węgiel.

Diatec Trentino from Italy needed a three-point win against Polish champions Zaksa Kędzierzyn-Koźle to claim No.1 in Pool E but they failed to do it. Despite the fact their job tonight was facilitated by the absence of Zaksa’s starting outside hitter, the Belgian Sam Deroo, who suffered an injury in Plus Liga game last weekend, Trentino were unable to finish off rivals and lost in the tie-break. Probably the key moment of the entire match was in the third set when Zaksa managed to come back from 17-21 and claim it. The Puerto Rican Maurice Torres notched 19 points for Zaksa while Filippo Lanza scored 21 points for Trentino.

GREEK CUP W: Olympiacos, Ilisiakos and Pannaxiakos in the semifinal