VfB Friedrichshafen remained one of the few teams in European volleyball who did not suffer a single defeat this season! 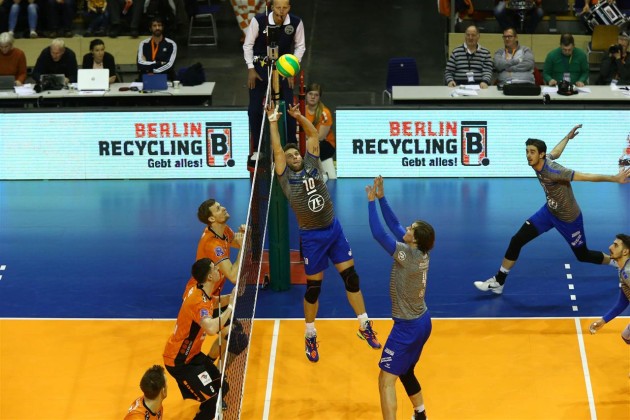 VfB Friedrichshafen prevailed by a 3-2 (25-22, 23-25, 25-23, 18-25, 15-12) over Berlin Recycling Volleys on the road in the German classic within the 2018 CEV Men’s Volleyball Champions League Playoffs 12 to remain undefeated in all 32 games which they played this season, including all domestic and international tournaments!

This was the third win of the „Häfler“ against BR Volleys in the 2017/18 (one-time each in the national Supercup, Bundesliga, and Champions League), which means they will have the chance to celebrate a Playoffs 6 promotion in front of own crowd in the rematch, on March 22.

The Belgian Noliko Maaseik, who replaced Final Four hosts Zenit Kazan in the Playoffs 12 bracket, notched a straight-set win against Lokomotiv Novosibirsk from Russia. The outside hitter from Luxembourg, Kamil Rychlicki, delivered 16 points for Maaseik. Sergey Savin scored 20 points for Lokomotiv, who is not the same team ever since the club management traded German Georg Grozer to Belogorie Belgorod.

AUT W: Klagenfurt in the final, Sokol/Post equalized in series