Zenit, Cruzeiro, Panthers, BR Volleys, Shanghai… Do you know what is the connection?

They all still have the perfect score in the 2016/17 season! 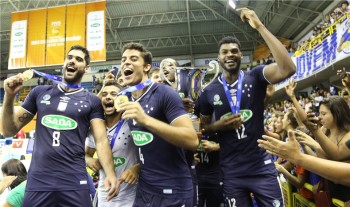 Looking at all the major volleyball leagues in the world, there are several teams that are still undefeated in the 2016/17 campaign. Let’s start from the beginning…

The reigning world champions Sada Cruziero are leading the race in Brazil with 4 wins out of 4 rounds and with maximum 12 points. Still, they are not the only undefeated team in the Brazilian Championship. Funvic Taubate also have 4 out of 4, but they have one point less than Sada Cruziero – 11.

The vice champions of the world and the reigning kings of Europe Zenit Kazan are dominating Russian Championship where they have 8 wins out of 8 games!

In France, there is only one team with the perfect score. Montpellier are holding the top of the table with the overall score 5-0.

We have an interesting situation in Germany. While BR Volleys are showing their power with 6 wins and 0 defeats, they are sharing the 1st place on the standings with United Volleys RheinMain! This team is the biggest surprise of the season in Bundesliga, as they are still undefeated after 6 rounds.

Just around the corner in Belgium, Knack Roesalere know only about wins in the 2016/17 season as they have the overall score 6-0.

Down in the south of Europe, Unicaja Almeria are leading the race in Spain with 6 wins out of 6 rounds, while in Greece, Olympiacos still do not know the feeling of defeat as they have all 5 wins in the Regular Season so far.

Looking at the Far East, Panasonic Panthers are marching through Japanese Championship with 7 wins out of 7 rounds.

At the same time, Shanghai and Beijing are the only two undefeated teams in the Chinese Championship with the current overall score 5-0.

What about Bolivar, in Argentina??…