Serbia redeemed to their fans for a loss on Day 1 of the 2018 FIVB Men’s Volleyball Nations League – Week 1. 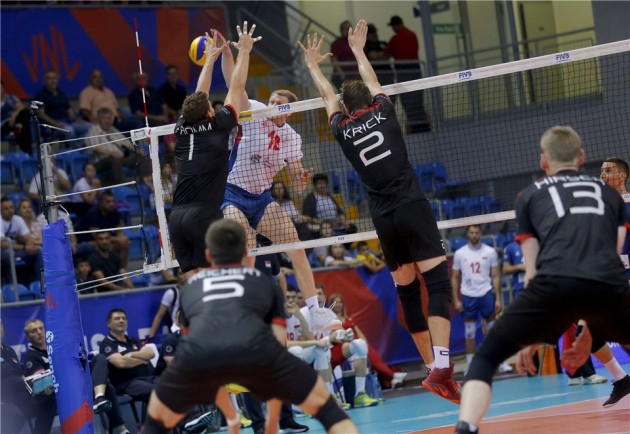 Serbia surpassed current CEV European Championship silver medalists Germany in four sets in front of own crowd in Kraljevo, in Pool 4, but only after losing the first set – partially 19-25, 25-21, 25-16, 25-14.

Both coaches mixed up their lineups. Especially Germany, whose head coach Andrea Giani left only two starters compared to the first game: Tobias Krick and Lukas Kampa. As for Serbia, their main power today was a player who acted as a backup opposite on Day 1, Dražen Luburić. He poured in 21 points. The things improved for Serbia when Marko Ivović replaced Milan Katić on the outside hitter position which occurred in the second set. Srećko Lisinac made 4 kill blocks for Serbia, as much as Krick on the other side. Daniel Malescha top-scored for Germany with 11 points.

The „Team Yavbou“ imposed dominance in the first set that was briefly interrupted in the second set in which Japan compensated the deficiency in height of their starting attackers (outside hitters Naoya Takano 1.90m and Hiroaki Asano 1.78m, and opposite Yuji Nishida 1.86m) with agility in defense. In the absence of Earvin Ngapeth (spent the entire match on the bench), Kévin Tillie highlighted France with 17 points. Nishida scored 15 for Japan.

In the same pool, Iran swept Australia by a 3-0 while Canada did the same to South Korea in Pool 3 in Kraków, Poland.