VNL M: Top 3 teams to avoid each other in Week 3, big rivals Brazil and Russia colliding in Ufa

Week 3 of the 2018 FIVB Men’s Volleyball Nations League will not bring mutual encounters of the top three sides in the rankings, Poland, Brazil, and the USA, respectively. Nevertheless, it will bring many excitements throughout tournaments in Canada, Japan, Russia, and France. 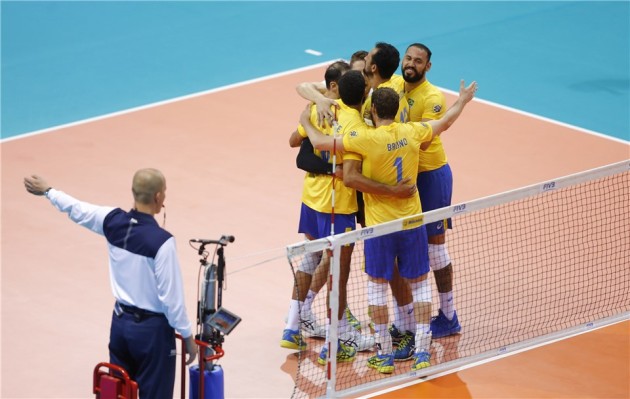 Pool 9 hosts Canada will play Australia, Germany, and the USA, on home soil at TD Place in Lansdowne Park, Ottawa, with two major additions to the roster that competed in previous two weeks, Jay Blankenau and Gavin Schmitt, who will likely begin the opening game against Australia as starters.

“After two weekends abroad, we are very excited to play in Canada in front of our home fans. The players are looking forward to competing in Ottawa and are prepared to continue our strong Volleyball Nations League campaign,” Stéphane Antiga, the head coach of Canada who have a four-game winning streak in the tournament, said.

Germany will have to play Ottawa matchups without their captain Lukas Kampa.

„It won’t be easy. Both the U.S. and Canada are playing a very good season so far. Against Australia we definitely expect something. Unfortunately, without captain Lukas Kampa, we lack an important support in the team, but I have great confidence in the entire team. We will increase our level of playing,“ Germany head coach Andrea Giani stated.

Japan returned home for Week 3 after a 36-hour trip from Brazil where Week 2 was held and had only one training upon arriving in Osaka before facing Bulgaria, current leaders in the standings Poland, and Italy.

By losing two games in Week 2, Italy got squeezed out from top 5 in the standings who will go to the final tournament in Lille, France, and will do their best to return there. But, a bad news for the „Azzurri“ fans is that two bombers, Ivan Zaytsev and Osmany Junatorena, as well as injured Oleg Antonov, will not be at the disposal of their head coach Gianlorenzo Blengini. Filippo Lanza is back though.

„It’s difficult to know which teams are best here. I told our players to concentrate on their own performance. It’s important to adjust ourselves in such a hard tournament. We changed our roster after Week 2, and it will be the first time some players feature. I believe that our players will make a maximum effort,“ Blengini said.

Russia will collide with big rivals Brazil, China, and Iran, at home in Ufa.

„Undoubtedly, this is one of the most important matches of world volleyball and we hope to make a good start on Friday,“ Brazil captain Bruno Rezende „Bruninho“ said on the match against „Zbornaya“.

“This is the third stage of the competition, many trips, little time for training, and there is a great concern about it, but the expectation is to make a great spectacle. The venue in Ufa is very good, we are very happy to be here,“ Brazil head coach Renan Dal Zotto commented.

For the second time this season, France will host one week of the Nations League and will play South Korea, Argentina, and Serbia.

The captain Benjamin Toniutti, libero Jenia Grebennikov, and outside hitter Earvin Ngapeth will return to the „Team Yavbou“ for the next three games.

„It’s nice to discover other places and to show entire France. I don’t remember matches of France volleyball team in the region of Aix-en-Provence for decades,“ France head coach Laurent Tillie said and added that he wants his team to score all the three victories to make a solid foundation for the rest of the Nations League.

VNL M: Poland outplay Italy in high-strung duel, Kubiak sidelined up to one month! Brazil take lead in the standings