Two teams secured their berths in the Final Six on Day 1 of the last week (Week 5) in the 2018 FIVB Men’s Volleyball Nations League: Russia and the USA. France got an automatic ticket as the hosts. 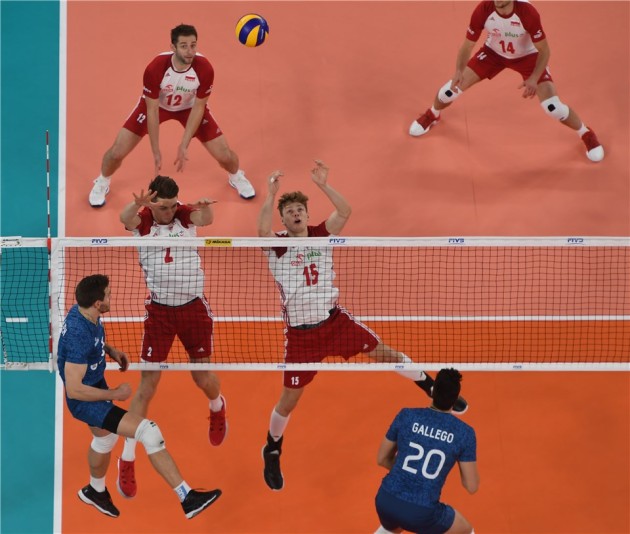 Poland made a significant step towards snatching the Final Six berth as they beat Argentina in Melbourne, Australia, but much tougher than the outcome actually reveals – 3-0 (26-24, 25-20, 29-27). Which is also important for the current FIVB World Championship winners, they broke a 3-game losing streak. Poland trailed by a 22-18 in the opening set before they made a 5-0 run and sealed the rival’s fate on the second set point. The Poles may have thought they completely broke the resistance of the South American side by clinching the second set with ease but Argentina gave them a hard time in the third set as Poland dropped a 4-point lead (21-17) and converted only their third match point. Thus, Poland claimed No.5 (9-4, 26 points) and will stay there until Day 2 regardless of the outcomes of other matches across the tournament. Mateusz Bieniek top-scored for the winning side with 16 points. Cristian Poglajen notched 14 points for Argentina.

Brazil ended their 3-game losing streak as the downed hosts Australia in straight sets, partially 25-22, 25-19, 25-19. Brazil head coach Renan Dal Zotto had an ace up his sleeve which he pulled out in the opening day of Week 5 – Lucas Lóh. The outside hitter debuted in the Nations League by joining Wallace de Souza‘s attacking display as these two scored 12 and 16 points, respectively. Paul Carroll delivered 14 points for Australia who fell at 5-8 and 15 points (No.12). Brazil have a clear path toward Final Six a 9-4 and 27 points (No.4). 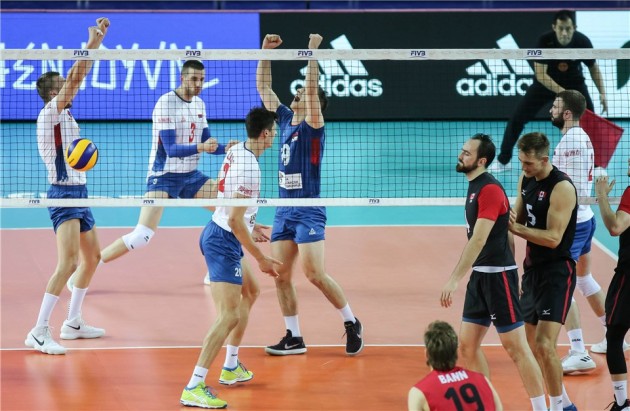 In theory, Serbia still have to compete until the very end to advance to the Final Six but in practice, they are in Lille already with one foot. After beating Canada in Jiangmen, China, by a 3-0 (25-21, 25-18, 25-17), Serbia have a solid foundation to hope for a clean sweep in Week 5, which will definitely allow them to find themselves in the final tournament, as they will now face China and Japan, who play only for their pride, in the next two rounds. Srećko Lisinac led Serbia to a win with 16 points (5 aces) as his team out-blocked Canada by a 10-1. Gavin Schmitt scored 17 points for Canada who will say goodbye to the Final Six in case Italy beat Russia today. On the other hand, Serbia are currently No.6 with a 9-4 record and 23 points.

As other results did not go into their favor, today, Germany and Bulgaria had to settle with playing each other only for a pride in Tehran, Iran. And it seems they both have a gigantic pride knowing they played a five-setter in which current CEV European Championship runners-up prevailed despite not having Christian Fromm and Tobias Krick in the lineup. Actually, both players remained on the bench the whole time. Moritz Reichert notched 19 points for Germany while Valentin Bratoev made 15 points for Bulgaria. 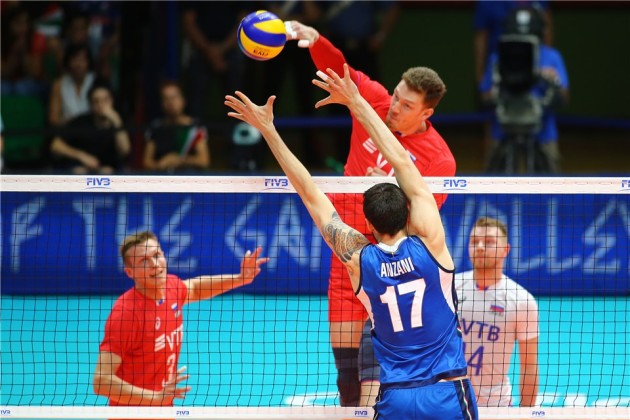 Italy got wrecked by Russia in front of own crowd at the legendary gymnasium PalaPanini in Modena and can progress to the Final Six only by mere theory as they no longer have fate in their hands in the last two rounds. „Zbornaya“ knew they need to clinch two points to secure a berth in the final tournament but, just in case, they seized all three – 3-0 (25-21, 25-22, 25-20). No matter of starting off the opening set on the right foot (8-5), Italy were swept today. By doing this, Russia scored the sixth straight win in the tournament, losing only one set while doing so! Interestingly, one of the two top scorers for Russia today was Dmitriy Muserskiy with 12 points despite acting as a backup in all three sets. Egor Kliuka scored 12 points as well. Ivan Zaystev made 15 points for Italy.

A duel between the leaders France and USA was a real treat for the fans in Modena from which both sides emerged victoriously – France as the winners and USA as the Final Six participants. The U.S. squad needed to snatch only one point today to progress to Lille tournament which was exactly what they did as France exceeded in five sets – 3-2 (25-21, 23-25, 26-28, 25-20, 15-12) in 2 hours and 37 minutes. By beating the USA, who committed as much as 44 unforced errors (20 more than the rivals), France recorded 7 wins in a row for the first time in 3 years. Stéphen Boyer tallied 21 points for the „Les Bleus“. Matthew Anderson scored 23 for the United States.