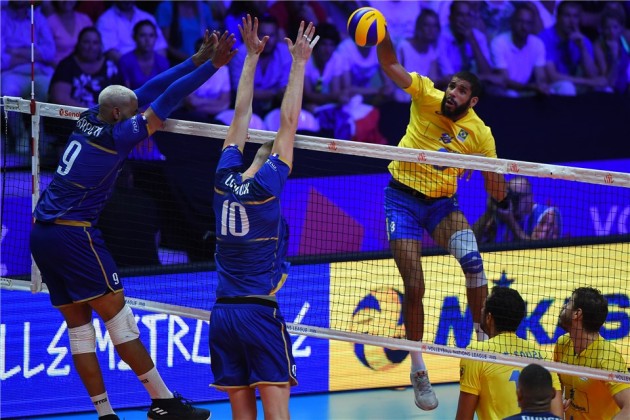 In an electric and tension-filled game but with several astounding rallies and fighting until the last breath, France thrilled the home crowd at Stade Pierre-Mauroy in Lille by beating fierce rivals Brazil in five sets.

The „Seleçao“ showed superiority in the opening set by gaining a 10-3! France managed to get up from the knockdown but not completely and on time.

Earvin Ngapeth was fired up from the start of the match but needed support which he finally got from Stéphen Boyer in the second set. Strangely, Ngapeth and Bruno Rezende “Bruninho”, who were inseparable while playing in Azimut Modena in the past few years, trash-talked each other through the net on several occasions! France kept a three-point lead (11-8) until the end of the set which was closed with Ngapeth-Le Goff kill block.

France got a momentum at the beginning of the third set (3-0) but Brazil did not give up and made a turnaround (16-12) at the second TTO. At 22-20, Brazil outside hitter Maurício Borges fell on the ground after making a hit. He was unable to continue playing as he sprained his right knee so Douglas Souza had to step in.

The fourth set was the most appealing of all tonight! It was a spectacle that very often left Lille crowd breathless. France were four points up (13-9) but Brazil leveled at 16-16 when William Arjona grounded Ngapeth! The „Seleçao“ players committed too many service errors from that moment on and France knew how to take an advantage of this.

Brazil’s poor serving continued in the tie-break. The key moment occurred at 13-12 when Wallace de Souza’s hit ended up out of bounds which gave the first match ball to „Les Bleus“. They did not convert that one but were successful when they got a second chance.

Boyer was the best scorer for France with 25 points while Wallace highlighted Brazil with 21 points.

VNL F6 M: Heynen – “We must learn to start the match better”