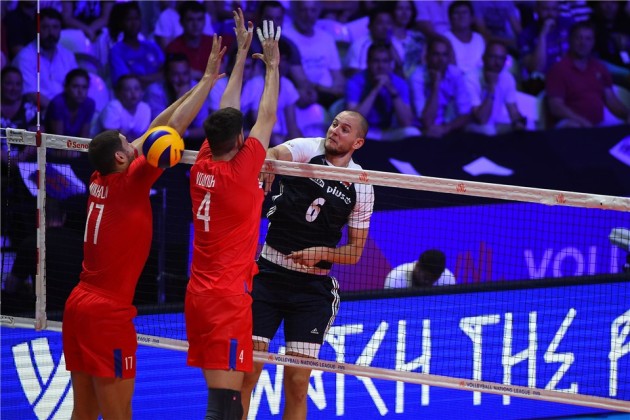 Russia downed Poland in the Final Six opening at Stade Pierre-Mauroy in Lille, France, getting an upper hand in Pool B when it comes to securing a semifinal berth.

It was impossible to predict which of these two teams will clinch the first set as things were leveled at 13 all. But then, Russia found their momentum to rebuild their 3-point lead, which they had once earlier (9-6), at 18-15. Maciej Muzaj hit the ball out of bounds at 24-18 and the opening set was over.

Poland head coach Vital Heynen noticed that Bartosz Kurek lacked support in attack and put Artur Szalpuk instead of Bartosz Kwolek in the second set. And just like in the first set, both teams ran towards winning the set shoulder to shoulder (14-14). That is when Dmitriy Volkov wrecked Polish reception by making a few strong serves to help “Zbornaya” take 4 straight points and keep the distance compared to the rivals until the end of the set.

Poland returned to the match by snatching the third set in which they displayed effectiveness in converting counter attacks and never looked back after gaining a 16-12.

Losing the previous set shook the Russians who had an 8-4 at the first TTO in the fourth set. Heynen made several substitutions but it did not help his team who quickly fell into the abyss (12-20) and stood there until the end. Egor Kliuka sealed Poland’s fate with a kill.