After another tight match, France finished the FIVB World League in good shape with a 3-1 victory over Argentina (25-23, 25-20, 22-25, 25-19). Best scorers: Earvin Ngapeth and Mory Sidibe, both with 14 kills for France and Iván Castellani with 13 while Pablo Bengolea had 11 points for Argentina. 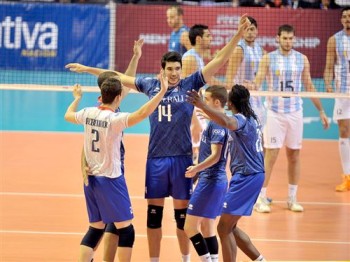 A hard serve by Ngapeth placed the visiting side just one point ahead at the second TTO, and the wing spiker successfully spiked at 20-18. The local guys weren’t able to change the tide and France closed the set keeping those two points of advantage.

In the second set, France had to wait until after the second technical timeout to walk to a 18-15 lead, with a nice counterattack by Ngapeth. Argentina lost its temper and gave a few points away in the end of the set, that France finally nailed five points ahead.

This time, the break between the second and third set didn’t seem to help the home side. The young opposite Solé built a solid block and Salta fans celebrated the first lead for Argentina in the set, which the local guys didn’t let go.

A huge block by Nicolas Le Goff leveled the scores in 16 and France took the opportunity, with Kevin Tillie in good shape for a 20-17 in the board. Argentina fell behind and Le Goff finished the match for France with six points of difference.

France relied on Earvin Ngapeth and Mory Sidibe, both with 14 kills, to achieve the victory. In Argentina Iván Castellani came from the bench to add 13 points in two sets, while Pablo Bengolea had 11 hits.

COLOUR YOUR SUMMER WITH WoV COLOURS!