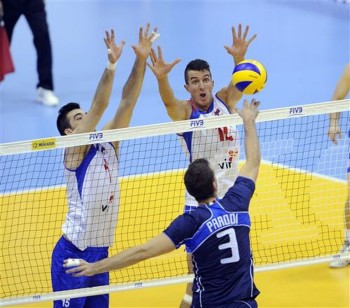 Despite their win, Serbia is officially out of the FIVB World League finals, allowing coach Kolakovic to shuffle the squad a little bit.

In the first set after an exciting finish, Serbian youngsters prevailed and concluded the set at 28-26 with a powerful killing block by Milan Rašić and Uroš Kovačević.

Italy came back with a vengeance in the beginning of the second set taking an early 8-2 lead. Serbia recuperated several points after the break on Stanković`s serve to reach 3 points of deficit at 5-8, but Italy wouldn`t let this one slip away to tie the match 1-1.

Italy started the third set better and managed to augment the lead to 2 points of advantage after the break (21-19), but Serbia reached the first set point and convert it with a powerful serve of Aleksandar Atanasijević for 25-23 and 2:1 in sets for the home side.

In the fourth set, Serbia went up 21-18. Atanasijević’s ace made it 22-18, and the final outcome was already in sight.

Ivan Zaytsev of Italy topped the scorers’ chart with 19 points, while Saša Starović of Serbia scored 18 for the winning team.