The members of France men’s national team got together on Friday after traveling home from their respective clubs to start a camp whereby they will get ready for the third-round World Champs qualifier scheduled for January 3-5 in their capital city. A press conference was held yesterday to share plans and expectations ahead of the much anticipated tournament taking place at the hall Carpentier. 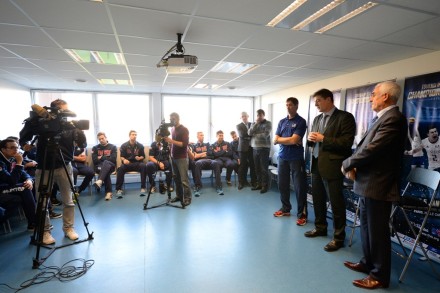 “This tournament is an early step on our way to the 2016 Olympics in Rio” said the President of the French Volleyball Federation, Yves Bouget. “We are very happy with hosting this tournament which is scheduled for January 3-5 here in Paris. If we qualify to the World Championships, we will also get the right to join a series of international competitions leading up to the Olympic qualification for Rio 2016. I am extremely pleased to get to meet the members of our national team, a group that is healthy in mind and body and that embodies a new image of French Volleyball” he added.

The World Champs qualifier coming up in early January will be joined by the national teams of Belgium, Spain, and Belarus. “With the start of this camp we are entering the final stage of our preparations for the World Championship qualifier” said head coach Laurent Tillie. “Our players are tired after going through a busy schedule in their respective national leagues (France, Italy, Russia, Germany, and Poland) and playing also matches for the Champions League. However, they all are extremely motivated and are happy to come together to prepare for this tournament which is going to impact on our schedule for the coming years. We will play three teams that have to be taken seriously. We still do not know which players Spain will nominate for the tournament but they may opt for some of their most experienced guys who won gold at the European Championship in 2007. The players from Belarus have got good technical skills and are physically strong too. As for the Belgians, they are the national team that improved the most this year and we will take on them on the last day of the tournament”.

CHN W: Jiangsu with the upset!