Italian Serie A continues with the tenth round matches and one in Perugia is going to be an interesting one. 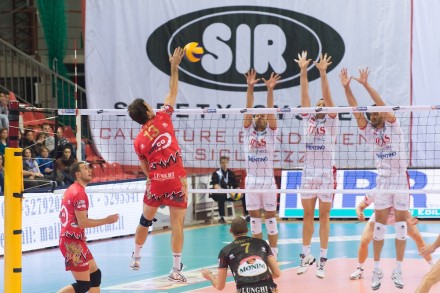 Second consecutive home game for Molfetta against Modena. Crucial game for both teams in their chase of a place in the Italian cup final eight. The southern team is just outside of it right now, but it is just one point behind Cuneo, 8th, and 3 points away from Modena, seventh.

Already certain to be in the cup, Verona will try to give more satisfaction to its fans against Piacenza. Giani’s team had a superb performance against Modena, while Piacenza is coming off a Champions League win, which gave them the qualification as first of the group. In the last round, they had lost against Trento.

Macerata has secured first place in the league at the halfway point of the season and qualification in the Champions League, even if that is as second. They will look for victory number 10. Ravenna will miss a couple of players but will try everything to keep its chance of a cup qualification alive.

Top level game at the PalaEvangelisti arena. Perugia plays host to the Italian champions. A win would get them into second place given that only two points separate the two teams. But Serniotti’s men are coming off a brilliant win over Piacenza which took them over Perugia and are eager to defend the second place they so nicely earned.

Thrilling game with the Italian cup at stake. Piazza’s boys are currently 8th but Molfetta, Città di Castello and Ravenna are all on the chase. A win would do them a lot of good but they’ll be up against one of the most in-form teams of the league. Two consecutive wins against Trento and Città di Castello took Vibo up to 6th, and very close to taking part in the cup for the fourth year in a row.

It’s not been an easy ride, but Latina qualified for the Challenge Cup 8th of finals this week through the golden set. Santilli’s boys are however bottom of the league and desperately looking for points against Città di Castello. The latter have been defeated 3-0 in its last two games against Cuneo and Vibo but there’s still in the hunt of a cup ticket.

ITA M: Smiles are getting bigger on...