GER W: Dresdner turn around series vs Stuttgart from 0-2 to 3-2, conquer Bundesliga 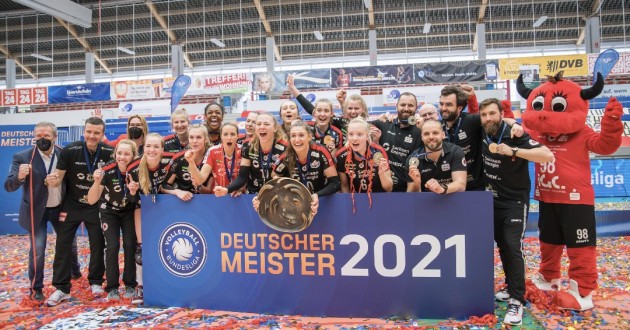 Dresdner secured themselves the 6th German Championship title and the first one after a 5-year break.

In the exciting series of the 2020/21 1. Bundesliga playoff finals against the reigning champions Allianz MTV Stuttgart, Dresdner came back from 0-2 (just like in the series against the same rivals after which they won their previous title, in 2016). The club from the State of Saxony prevailed in Game 5 in straight sets 3-0 (25-20, 25-23, 26-24), which was quite a surprising outcome given that the previous 3 games of the series ended with tie-breaks.

Stuttgart were very much handicapped in the decider as their top scorer Krystal Rivers, who was close to 40 points a couple of times in the series, couldn’t play. The American opposite hitter is injured and she missed Game 4 as well. The Swiss opposite Maja Storck from Dresdner, who excelled in all matches in the playoff finals, was named MVP of Bundesliga.

Germany: Defeat at the end of the...