Germany: Reserves leave their mark for UNTERHACHING in last round of Bundesliga 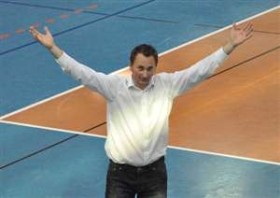 Reserves leave their mark for UNTERHACHING in last round of Bundesliga

Paduretu (see picture) had totally transformed his team against the last-placed club of the Bundesliga.

Roy Friedrich and Thiago Carvalho took the role as middle blockers while Tom Strohbach and Denis Kaliberda were lined up as outside hitters, Robert Hupka played as libero and Huib den Boer started as setter.

Simon Hirsch took over the duty of opposite from Christian Dünnes but injured himself in the first set and was replaced by Alex Shafranovich.

Dünnes himself was sitting in the stands while nursing a knee injury.

“If it was necessary I could have played”, he said.

Dünnes suiting up wasn’t necessary at all.

UNTERHACHING reserves took control from the first point on and after 20 minutes it was Tom Strohbach who finished the first set.

The youngster played his role as a receiver very well but in the end wasn’t satisfied with his overall performance.

“I just made too many mistakes”, he said.

Coach Paduretu gave Strohbach thumbs up anyway: “He is the player that has mostly improved. He is a Volleyball fanatic”.

The match stayed a lopsided affair and it was MVP Denis Kaliberda who finished it after just 64 minutes.

“I don’t have to say much about this game. We should forget it right away. That was no opponent of Bundesliga caliber”, Paduretu said.

Nevertheless he was satisfied with his players.

“Our reserves did a good job”.

Before playing in the Playoffs 12 of the Champions League UNTERHACHING has another away game in the Bundesliga, playing at VC GOTHA on Saturday.

The match next Wednesday is already in the back of Generali’s minds though, especially the away game almost 5’000 kilometers away from home in Siberia a week later.

“We have to ask NASA for a space ship for this horrendous trip”, Paduretu jokingly said already at the draw.

More seriously he added about the strengths of Lokomotiv NOVOSIBIRSK: “They are one of the favorites to win the Final Four”.